Editorial: “Made in America” inspires reflection

I was raised in a small town where, in the fall on Friday nights, shops closed down for football games, and during the winter you had to leave 30 minutes early to get a seat in the gym.

On the Fourth of July, the whole town had a picnic and local singers, many of whom were veterans, sang patriotic songs all day long. We would finish the night off with a fireworks show that could rival the ones in Washington D.C.

When I was a young boy, I spent countless hours watching my dad build fence around a farm that lost money nearly as many years as it made it.

As I got older, I helped him out occasionally, even though it made no sense to me to waste my time building fence ruining a perfectly good pair of Lucky jeans and my new Nikes.

When I turned 16, I thought about buying a new Nissan 350Z, but my dad quickly shut down that idea. Instead, I ended up driving a 1967 Mustang that he and I spent countless hours working on.

I always thought my dad was old school and had everything backwards. His old stories about spending everyday in the watermelon patch seemed outrageous to me.

After I graduated school and worked a couple summers on my grandfather’s farm, I began to understand why my dad thought the way he did. In fact, I began to realize I was the one that was wrong.

My dad was living the real American dream. He worked his entire life to build a better life for his family. He taught my sister and me to value the things he thought made the United States the greatest country in the world.

The other night, I was driving home after a softball game and the Toby Keith song “Made in America,” came on the radio. I could not help but smile thinking of how it reminded me of my dad.

I began to think, what if there were more people in this country that thought like my dad? I truly believe the country would be in better shape now, if more did.

The song’s lyrics begin by saying, “breaks his heart seein’ foreign cars, filled with fuel that isn’t ours and wearin’ cotton we didn’t grow.” I think if we all looked at these things the same way as described in this song we could begin to fix some of our problems.

I am always cautious to criticize this country I love so much, but I feel like I need to say something. We have let it go long enough. It is time to become the world leader in innovation, industry and agriculture again. We should not be borrowing money from China. It is time to get these things fixed.

Next harvest, I say that we should set the price of a bushel of corn at the same price as a barrel of crude and I bet we would see gas prices drop. We should push for more drilling in the United States and become less dependent on foreign nations.

I want my son to look back someday and say, “He won’t buy nothing he can’t fix with WD-40 and a Craftsmen wrench; he ain’t prejudice, he’s just made in America.” 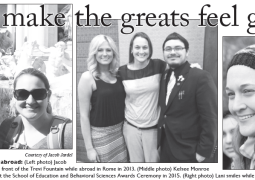 Hitting the Sales at CU Bookstore

0 thoughts on “Editorial: “Made in America” inspires reflection”