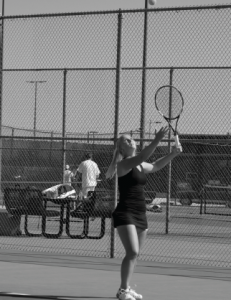 The Cameron University tennis team has taken the court for their fall season. Both the men and women are lead by Head Coach James Helvey who is in his 18th year as the men’s coach and his 12th as the women’s coach.

The Aggies hit the road for Oklahoma City on Sept. 14, for a match against Cowley College in which both the men and women emerged victorious. Helvey is pleased with just how well his Aggies have done already this season.

“We had a good win on both sides,” Helvey said, “we are looking forward to just getting back on the court.”

The Aggies fall season has been a scorcher, literally. Helvey explained how the heat has taken a toll on practice schedules and when the team can actually hit the court.

“At the beginning of the year we had a thermometer on the court that read about 120 degrees Fahrenheit,” Helvey said.

However, Helvey is not one to make excuses. He has had his Aggies hard at work and it showed in their first match.

On the men’s side of the court, the only loss was dubbed to senior Thomas Peixoto. Cowley’s number 1 player, Zack Evenden in a 2-set match, losing 6-1 and 6-4, defeated Peixoto.

The Aggie men did see eight other wins to greatly counteract the one loss. The Aggies saw most of their wins from the doubles teams as they made a clean sweep going three for three against Cowley.

The women had a similar day in terms of doubles matches. Sweeping all three wins from the court, the women would also go on to win eight matches and only lose one. Sophomore Florencia Toreno had a tough 3-set match in which she emerged victorious after an amazing comeback in the last two sets making a comeback from a 3-6 loss in the first set, Toreno won her last two sets 6-4 and 6-4.

The Aggies have played some good tennis so far this season and Helvey is excited to see just how his teams will do in coming matches.

“Every year I love to see the growth,” Helvey said, “I’m constantly talking about reaching that next point of what are we going to do this year that we did not do last year.”

The Aggies are currently in the off-season and have only a few days this semester in which they can practice and compete. Helvey has made sure that his Aggies are within those guidelines for play in the fall.

“Per the NCAA we only get a forty-five day window in which we have twenty-four to practice and compete,” Helvey said.

The bulk of the Aggies competition days are concentrated to the month of September with only two matches in October. Helvey is looking forward to how his teams will shape up for the spring season and he is optimistic for big wins.

“My goal every year is to win that national title,” Helvey said.

In the last four years, Helvey has seen some big wins on both the conference and regional levels of play.

The Aggies still have a few matches this fall and Helvey is whipping his teams into shape so that they will be ready for their spring season. Both teams will be competing in the ITA Men’s and Women’s Regional Championship in Springfield, Mo., from Sept. 30 to Oct. 2.