GARDEN CITY, N.Y. (AP) — A prosecutor in New York is investigating whether students in other districts on Long Island took part in a cheating scam on college entrance exams that resulted in the arrest of seven current or former students at a prestigious high school.

The arrests were made Tuesday on allegations that one of the seven associated with Great Neck North High School — a 19-year-old college student — took the SAT exams for the others in exchange for payments of up to $2,500.

Sam Eshaghoff provided fake IDs when he sat in for his classmates on the exams between 2009 and this year, prosecutors said. In one of the cases, he is accused of taking the SAT for a girl, although in that case he did it for free, Nassau County prosecutors said.

He has pleaded not guilty to charges of scheming to defraud, criminal impersonation and falsifying business records. He’s a student at Emory University in Atlanta and also attended the University of Michigan; he posted $500 bail and was released.

“This should have been handled by the school administration,” Emouna said in a telephone interview. “Where are you going to draw the line as a society? Are we going to start arresting kindergarten kids? Everyone knows cheating goes on. We’re not proud of it, but in some way we’ve all done it.”

Eshagoff’s six current or former classmates were released without bail after being charged with misdemeanors, prosecutors said.

The six, some of whom are now in college, apparently got their money’s worth: Prosecutors say Eshaghoff scored between 2140 and 2220 on the tests, which are used by college administrators in determining who gets into school. The top score on an SAT is 2400.

Great Neck North faculty members this year had heard rumors that students had paid a third party to take the SAT for them, Rice said. Administrators then identified six students who “had large discrepancies between their academic performance records and their SAT scores,” the prosecutor said.

Tom Ewing, a spokesman for ETS, which administers the test for The College Board, said strict security guidelines are in place to prevent cheating. He said students must present an admission ticket and photo ID, which can include a state-issued driver’s license; state-issued non-driver ID; a school identification card; a passport or other government-issued document.

In the Great Neck case, the students registered to take the tests at a school outside their district so they would not be recognized, prosecutors said. Eshaghoff then went to the schools and showed a photo ID with his picture but another student’s name on it, Rice said.

At least once, Eshaghoff flew home from college primarily to impersonate two students and took the SAT twice in one weekend, authorities said.

It is not clear how Eshaghoff would have managed to get past security while taking the test for the girl. Because the six classmates who allegedly “contracted” with Eshaghoff were not identified by prosecutors because they are minors, it is not known if the girl had an unusual name that could have been mistaken for a boy’s.

Ewing noted that because instances like the one in Great Neck are rare, there is no need to review security measures ahead of this weekend’s exam, the largest of the year with nearly 700,000 students already signed up.

“We can’t allow the actions of a few to dictate unnecessary measures for the majority of honest test takers,” he said. 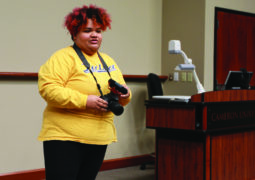 0 thoughts on “Students arrested in SAT cheating case in NY”