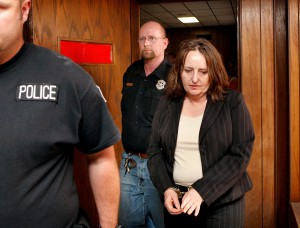 MANGUM, Okla. (AP) — As the wife of a warden, Bobbi Parker knew all about the pace of life inside the Oklahoma state reformatory where she lived in a house with her husband and daughters before disappearing 17 years ago with a convicted killer.

Now Parker is facing prison time herself, though jurors are recommending just one year for helping Randolph Franklin Dial escape — a charge that carried a maximum sentence of 10 years in prison.

Parker, 49, showed no emotion as jurors returned their guilty verdict. She said nothing as she was handcuffed by sheriff’s deputies and escorted to the county jail adjacent to the courthouse after District Judge Richard Darby denied requests for bond that would have allowed her to remain free during an expected appeal. Darby set formal sentencing for Oct. 6.

Her husband, Randy Parker, bowed his head and was comforted by family members after the 12-member jury delivered its verdict following about 14 hours of deliberation over three days. Parker, a 27-year employee of the Oklahoma Department of Corrections who now works as its security and facility operations manager, testified during the trial that he still loves his wife despite her disappearance with Dial and almost 11-year absence before they were found living together in 2005 in East Texas.

Prosecutors alleged Parker fell in love with Dial and ran off with him on Aug. 30, 1994, when her husband was deputy warden of the prison in Granite. Defense attorneys maintained that Dial drugged her, kidnapped her at knifepoint and held her hostage for more than a decade by threatening to use his alleged mob connections to harm her family if she tried to flee.

Police said they found the pair living happily as man and wife on April 4, 2005, on a chicken ranch near Campti, Texas.

Prosecutors said they were happy with the jury’s decision in a trial that lasted from the spring to the edge of autumn and involved more than 80 witnesses and nearly 800 pieces of evidence.

“We’re just grateful for the work of the jury to sacrifice their summer,” said Assistant District Attorney David Thomas, the lead prosecutor.

District Attorney John Wampler, who filed the original charges in 2008, said he believes the verdict vindicates the prosecution.

“I feel that justice has been served,” he said. “The months of work these guys put into the trial was justified by this verdict.”

Defense attorney Garvin Isaacs said Parker did not receive a fair trial and promised to appeal the verdict. He had complained before the trial that the passage of time and the deaths of several witnesses, including Dial, violated Parker’s due process rights.

“I will never quit until Bobbi Parker is a free woman,” Isaacs said. “We had overwhelming evidence of Bobbi Parker’s innocence. … We’re going to have another trial in this case. This case will be reversed on appeal.”

Dial helped Bobbi Parker run a pottery program at the prison where prosecutors alleged she became Dial’s mistress. Witnesses at her trial said the two had behaved inappropriately at the home on prison grounds.

Jurors asked for a magnifying glass during deliberations Tuesday, then asked Darby if they could travel 12 miles to Granite and tour the grounds of the reformatory where the Parkers lived. Darby set up the visit for Wednesday and, after traveling in a five-vehicle caravan, the panel spent 15 minutes looking at the area around the old Parker place.

Within two hours of returning to the courthouse, the jury foreman said the panel had reached a verdict. Jurors left the courthouse without comment after delivering the verdict.

Dial died in 2007 at age 62, but until his death he backed Bobbi Parker’s version of events.

Parker pleaded not guilty to a felony charge of assisting a prisoner to escape after being accused the day before the statute of limitations expired. Isaacs had told jurors early in the trial that Parker would testify but said Wednesday he decided against it because he feared testifying would be traumatic for her.

Dial was serving a life sentence for the 1981 murder of Broken Arrow karate instructor Kelly Dean Hogan, then pleaded guilty to the 1994 escape. He was never charged with kidnapping.

Image: Bobbi Parker is taken in handcuffs from the courtroom after being found guilty, at the Greer County Courthouse in Mangum , Okla., Wednesday, Sept. 21, 2011. Behind her is Greer County Sheriff Devin Huckabay. A Greer County jury determined that Parker, the wife of a former Oklahoma prison warden, helped convicted killer Randolph Franklin Dial escape from the Oklahoma State Reformatory in 1994. Parker insisted that Dial kidnapped her and kept her from reaching out for help for more than a decade by threatening to harm her daughters. The two were found living together in Texas in 2005. (AP Photo/The Oklahoman, Jim Beckel)