October is just around the corner and with the chill of fall in the air that means one thing to baseball fans; it is time for the Major League Baseball Playoffs.

This year, baseball fans from Cameron may have a new team to root for. The Atlanta Braves selected former CU player, Chase Larsson, in the 2011 MLB draft. Larsson, selected in the 6th round, finished last season with a .432 batting average.

Larsson is currently in the Atlanta Braves farm system. He is completing his first year of rookie ball and looking to work his way up to the show.

According to head CU baseball coach, Todd Holland, Larsson is just beginning to learn what professional baseball is all about.

“It is his first year of rookie ball,” Holland said. “He is just learning the ends and outs of it.”

Holland noted the transition from college baseball to the professional level is not always an easy one. The biggest obstacle to overcome is moving from an aluminum bat to a wooden bat.

“You have got to understand once you go to a wood bat it takes a while to get adjusted,” Holland said. “That is why they have the instructional league.”

“They invite the good players to instructional; it is a month deal where they go get instruction,” Holland said. “So it’s a positive that he got invited to that.”

According to Holland, Larsson has made considerable strides throughout the season. His batting average has improved and he is striking the ball better.

“He has been successful, his numbers are up a little bit,” Holland said. “He’s really starting to get it going.”

Holland said that he keeps close contact with Larsson and receives phone calls about his former player.

Holland said that Larsson has had a big couple of weeks. Coaches have commented to Larsson that he is showing significant improvements with the bat.

“This last week during the playoffs he started hitting lines drives and he is being more aggressive at the plate,” Holland said.

Holland explained that Larsson is beginning to square up the ball and that this could put him on the fast track to the big leagues.

According to Holland, a first base coach told Larsson that if he continued to hit line drives like that it would take no time for him to make it.

Holland stressed the importance of a tough offseason workout routine for Larsson. He said that if Larsson worked hard he thinks that he can make it to the Majors.

“If he goes home from rookie ball this year and works out, gets big, strong and fast he’ll make it,” Holland said.

Perhaps by next fall, CU students will see a former Aggie take the field in the 2012 fall classic. 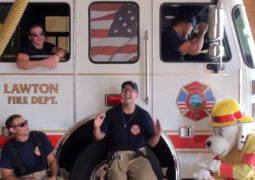 The Lawton Fire Dept. Lip Sync Challenge: Why It Matters To Us All 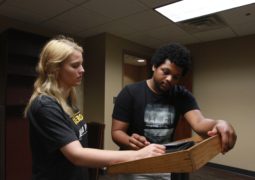