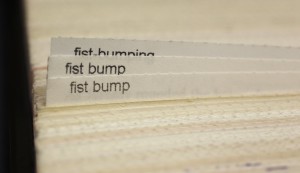 SPRINGFIELD, Mass. (AP) — Here’s something for your Twitter feed: “Tweet” has earned a spot in the Merriam-Webster Collegiate Dictionary.

Used as both a noun and a verb, the word describing a post made on the online Twitter message service is among more than 100 new terms revealed Thursday for the dictionary publisher’s newest edition.

“Tweet” takes its place among newly included words that reflect everything from high-tech advances to the delicate nuances of family and social relationships.

The newcomers include overly involved “helicopter parents,” for instance, and the “boomerang child” who’s returned home in adulthood for financial reasons. Maybe he’s spending his days listening to “Americana” music, steering clear of that lonely “cougar” across the street and hanging out a lot with his best buddy, shaking off jokes that they’re in a “bromance.” And, of course, he “tweets” every detail of it.

The wordsmiths at the Springfield, Mass.-based dictionary publisher said they picked the new entries after monitoring their use over several years and watching for references in a variety of sources, including mainstream media outlets.

“Even if people had no interest or possible chance of getting a Twitter account themselves, they now have to know what ‘tweet’ means, and that’s really why it’s in the dictionary,” said Peter Sokolowski, Merriam-Webster’s editor at large.

“It’s not just because the users of that service are so numerous, although they are. It’s because even the non-users have to know what that word means because they’ll encounter it so often in everyday use,” he said.

A London-based competitor, the Oxford English Dictionary, also recognized the growing service when it added “retweet” to its Oxford English Concise version this summer with other technology-influenced terms like cyberbullying, which already had a spot in Merriam-Webster’s dictionary.

Another noteworthy newcomer: “fist bump,” which Merriam-Webster President and Publisher John Morse says he considers “the star of the group” for its ability to succinctly capture the movement and emotion of that simple act of solidarity.

Two people can take special credit for the elevation of “fist bump” into the dictionary: President Barack Obama and First Lady Michelle Obama, whose knuckle-knocking gesture of affection when he accepted the 2008 nomination was described by The Washington Post as “the fist bump heard ’round the world.”

The act of bumping the front of a closed fist against that of another person has been common for years in sports. Some media outlets have also speculated it might have grown as a way to avoid handshakes and germs, or as a hip alternative to the high-five.

When the presidential candidate in a major American political party does a fist bump with his wife on worldwide television, there’s no question that the term has earned its place in the dictionary, Morse said.

“Everything else on the (new words) list can be somewhat tied into a theme, whether it’s technology or social change or sports. But fist bump is just pure American culture expressing itself in its own vocabulary,” Morse said.

Other new words for 2011 in Merriam-Webster include terms heavily influenced by new technology, like m-commerce (business transactions conducted by using a mobile device); and by sports, including walk-off (ending a baseball game by scoring the home team’s winning run in the bottom of the last winning).

Others, like cougar — an often unflattering term for a middle-aged woman on the hunt for a younger man — might not have made it into the dictionary because of their slang roots, but became too widely used to overlook.

The music genre known as Americana, with roots in early folk and country music, has been popular in certain circles for years, but gained enough widespread attention recently to place the term among other new dictionary entries.

The Grammy Awards have included a separate category for the best Americana album since 2009, and some of its best-known musicians — including John Hiatt, Emmylou Harris, Levon Helm and Steve Earle — have had crossover success on other genres’ hit charts.

Jed Hilly, executive director of the 12-year-old Nashville, Tenn.-based nonprofit Americana Music Association, said news of the word’s inclusion in the dictionary has spawned jokes about making T-shirts bearing the word and the invitation, “Look it up!”

“It’s still a little off the radar because we’re not super commercial, but there are a lot of people who will be very excited about this,” Hilly said.

Image: This Wednesday, Aug. 24, 2011 photo displays the entry “fist bump” on an index card at the Merriam-Webster publishing headquarters in Springfield, Mass. Though the knuckle-tapping action has been around for years, fist bump’s place in popular culture was cemented by President Obama and First Lady Michelle Obama when Obama accepted the 2008 Democratic nomination, and now has earned a spot in the Merriam-Webster Collegiate Dictionary. (AP Photo/Charles Krupa)