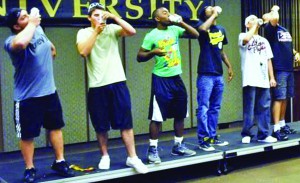 The Sigma Tau Gamma Fraternity tested 10 contestants in all things man at their first annual Manlympics, held at 7 p.m. on Sept. 8 in the Shepler Ballroom.

According to Kevin Stieb,
a 20-year-old junior Biology major and a Sigma Tau Gamma member in charge of the event, the contestants were posed with several challenges aimed at testing their “manly” skills.

Stieb said the Manlympics began with a hotdog-eating contest that eliminated one contestant, who then became the fourth judge in the competition. The following rounds, he said, consisted of things such as an arcade style football throwing competition, man themed trivia and a tie-a-tie contest.

According to Stieb, this was the first year the Sigma Tau Gamma Fraternity held the event, but not their first attempt at it.

He said the fraternity had originally planned to do the Manlympics during the 2011 spring semester, but the ice storm that shut down the Cameron campus forced cancellation.

Stieb said they decided to try it again this semester and thought it was reasonably successful despite not achieving the turnout he had anticipated.

He went on to say that they had unintentionally planned the Manlympics at the same time as a CU volleyball game.

“Although I was expecting more people to show up, I think the event was a moderate success,” Stieb said. “We accidentally scheduled two of our events during volleyball games so the people who traditionally would have attended had to decide between the two. We’ll try to make sure that we don’t do that again.”

According to Stieb, the person placing first in a round received 15 points, followed by 14 points for second place and down from there. He said the judges also awarded up to 20 style points to each contestant in each round, and that the overall winner was determined based on total points.

The winner of the Manlympics was 23-year-old senior Business Management major Myles Mendez.

Mendez said he had no strategy for winning, noting that he was decent at many things. He went on to say that he had a great time during
the competition and would participate again if this were not his last year at CU.

“I didn’t really have a strategy,” Mendez said. “I’m just a jack-of-all-trades, master of few.”

According to Stieb, there were two other events held by the Sigma Tau Gama Fraternity on Sept. 8. The first was a
poker run with a twist; the second was a paper-rock-scissors tournament.

“The poker run was essentially set up like a typical one except that the locations were spread around campus and participants had to answer man trivia to receive a card,” Stieb said. “There was also a rock-paper-scissors tournament, which had a large turnout.”

Stieb said the Manlympics, as well as the Poker Run and the Rock-Paper-Scissors tournament, were part of Sigma Tau Gama’s Rush Week.

He went on to say that the point of the Manlympics was to recruit for the Fraternity.

“The Manlympics was a recruitment event for sigma Tau gamma,” Stieb said. “The purpose was to see who the manliest person on campus was, then give him $100 for manly things such as beef jerky and straight razors.”