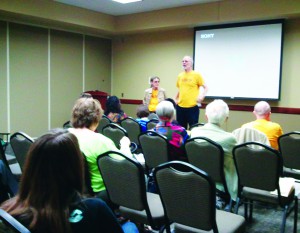 Fort Apache is a 1948 film directed by John Ford and starring Henry Fonda, John Wayne and Shirley Temple. The film takes place in the post civil war period where an arrogant and egocentric colonel leads his hesitant men into battle against a Native American leader Cochise, played by Miguel Inclan, and his well-prepared tribe. Despite warning from Colonel Thursday’s subordinate, Captain Kirby York, played by John Wayne, Colonel Thursday leads his regiment into the attack. The regiment suffers heavy casualties and Colonel Thursday dies.

The press portrays Colonel Thursday as a great man who died on the battlefield fighting bravely for his country. This is the irony of the movie.

The first two episodes from the 1940 Green Hornet serial were shown earlier in the evening. The serial was a lighthearted action comedy drama in which the publisher of a famous newspaper, with the assistance of his sidekick Nato, fights against crime.

Dr. John Morris, Professor of English and adviser of the Magic Lantern Film Society said that in the past, people used to go to the theatres once or more a week to watch the movie serials like Green Hornet.

“Though such serial movies did not have a serious storyline and made little sense, people still loved them,” Dr. Morris said.

is all set to screen 12 movies including a “Halloween” and “Silent Movie” double features.

“The dubbed version of foreign movies do not sound genuine to the audience,” Dr. Morris said. “Adding subtitles helps the audience to hear the original voices of the actors and also understand them.”

Dr. Morris said that the advisers and student officers of the society meet to decide which movies to feature for a year.

“We also take requests from audience,” Dr. Morris said. “We put some of the requested films in the list of upcoming movies.”

Beth Gregory, Director of Upward Bound and Open Doors, enjoyed the movie night with her students.

“I have a group of Upward Bound program kids watching the movie today,” Gregory said. “They are required to attend at least one cultural program a month and they like to watch the classic movies here which otherwise they will never watch.”

Alla Ivanova, a Fulbright student from Russia who is also teaching Russian at Cameron, said that she liked the movie.

“I am interested in American culture and also like watching old movies,” Ivanova said. “This movie showed some culture and history of America and I am looking forward to attending other movie nights in the future.”

Dr. Morris said that the Magic Lantern provides inexpensive entertainment to everyone.

“We show the great movies of different genres that are at least 10 years old,” Dr. Morris said. “Watching such movies can become an important part of College education for the students.”

Cameron History Professor Mark Stegmaier and Cameron English/Foreign Language Professor Marilyn Beaney started the society in the spring of 1982. The first showing featured two sixteen mm movies. The Magic Lantern Society was named after a theatre called the Magic Lantern that was located in Santa Barbara, California. The magic lantern was also a  name given to early projection equipment.

Senior Mary O’Doherty, an English major is the current president of the society. Sherry Newell, Professor in Emerita in the Department of English is the adviser of the society along with Dr. Morris.