Editorial: These colors still do not bleed

These colors still do not bleed. The flag still waves. Americans still stand free on the shores of their homeland.

Regardless, people took the time this past week to pause their busy lives and remember the events of that day. I am sure many of their thoughts went back to what they were doing that day, the emotions they felt, and the whirlwind their lives may have turned into after that day.

I don’t remember that day vividly, not as vividly as I would like anyway. At the time, I was about 10-years-old living in San Antonio, TX.  I was home that morning with my mother and my brother, who is two years younger than me. My brother and I were home-schooled at the time so a morning at home was not uncommon. The three of us were huddled around the kitchen table. I believe I was doing something as ordinary as math problems when the phone rang and my father relayed the news to my mom.  My family did not subscribe to cable at the time, so I remember the radio immediately being switched on.

At first, my mother didn’t tell us everything that was going on, but there was a look of panic on her face, and from the tone in her voice, we knew something was wrong. As breaking news story after breaking news story came through the radio speakers, my mind began to piece together everything that was happening. A plane had hit the Twin Towers; many people were already believed to be dead, and others were scrambling for their lives while the buildings burned.

But, as you know, this wasn’t the end of that day’s events. Two more planes would go down. One landed in a field in rural Pennsylvania and another in part of the Pentagon. Before the morning was over, the nation was sent into a frenzy of fear, sorrow, and uncertainty.

Within minutes of the tragedy, the nation’s leaders were holding Cabinet meetings, press conferences, and just trying to calm the people down while figuring out the best approach. Negotiations were being considered, rescue teams were organized, and troops were being put on standby. All the while, those towers still burned.

Ten years later, a war that resulted from that day still claims the lives of our soldiers. Tears still fall, families are still ripped apart, and lives are still put in danger-all because four planes changed the world we once knew. Regardless of the individual opinion of whether we are wasting our time fighting this war or not, it is imperative that Americans remember what happened on that day. It is necessary that people remember the sacrifices that are being made daily by our soldiers to ensure our country stays free. The country song ‘Have You Forgotten?’ by Darryl Worley comes to mind.  The first five lines of the chorus of that song perfectly describe the need to remember that day. “Have you forgotten how it felt that day to see your homeland under fire and it’s people blown away? Have you forgotten when those towers fell? We had neighbors still inside going through a living hell.”

I urge you to take time to remember these events. They are a part of our history now, and one of the purposes of history is to help us remember and learn from our mistakes. Our leaders have not done everything right. There were mistakes made before the attacks. Security should not have been as loose at it was before the attacks. Americans were almost completely taking for granted the peaceful life that we lived. We needed a wake-up call; unfortunately, it took a tragedy for us to realize the threats.

There was at least one positive consequence of these attacks however. During the few months after the attacks, this nation was unified like it had not been in years. Suddenly, all the arguments seemed petty in light of the hurt that families were going through. Most people shared common feelings towards the agencies that had attempted to destroy our country, shared sympathy with those who lost loved ones, and experienced fear for family and friends that were affected by that day.

If we forget what happened that day, we run the risk of forgetting the risks that could be threatening us after this war is over. Therefore, I urge you as an American to ask yourself “Where Were You When the World Stopped Turning?” as Alan Jackson suggests in his song. Remember the people that gave their lives that day from people working in the Pentagon or the Towers to the firefighters and emergency crew that didn’t make it out. Remember the soldiers that continue to give their lives for our freedoms. Regardless of your political views, there is no excuse to not remember.

These colors still do not bleed. The flag still waves. Americans still stand free on the shores of their homeland. We must never forget. 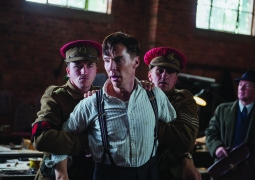 Learning from ‘The Imitation Game’

0 thoughts on “Editorial: These colors still do not bleed”