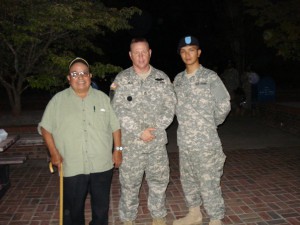 Growing up, my goal was to be like the other males in my family and join the military. Immediately after my junior year of high school, I enlisted in the Oklahoma Army National Guard as a Chaplain’s Assistant.

I fondly remember the day before I graduated basic combat training at Fort Jackson, S.C. Like all basic training cycles, this day is a designated family day.

For the first time since I left Oklahoma, I got to see my parents. I quickly noticed something different about how my dad was treating me. I could tell he saw me as a different person.

He wore the biggest smile on his face that I had ever seen in my life. My father was definitely proud of the man I was becoming.

Four years later, that memory still comes vividly as I continue to serve in the military and finish my education.

The memory is a reminder of the stronger connection and further approval that I gained from my father that day. It is one of the biggest motivators in my life.

Like many other veterans, my father has served several tours overseas and has seen some of the worst aspects of war. The head trauma and other injuries he received while in combat finally caught up with his age.

He is considered a physically disabled veteran. His injuries from his time in service have caused him to live with several sustaining problems with his shoulders, back and other areas.

He currently suffers from dementia as a result of head trauma from combat. Conversations with my father are not and will not be like they were years ago.

Furthermore, some of his conditions are associated with the Agent Orange herbicide used during the war in Vietnam and he still deals with Post Traumatic Stress Disorder from the combat tours in Vietnam and in Korea.

Without him, I would not have had the many opportunities that I have today.

What I can do is continue to tell him “Thank you for your service, Dad.” His sacrifices provided for my family and cleared the path for my siblings and me to be who we chose to be.

So many members of our Armed Forces, past and present, have made similar sacrifices. Many have given up their lives in order for us to continue chasing the American Dream.

These service members, regardless of their opinions on current warfare, stand ready to defend the principles that our great nation we were founded on.

Being in a military community, it is common to see military personnel around so often. The “Thank you for your service” does not come as often as when someone is in a primarily civilian area.

During the most recent drill weekend, I went to lunch with two other soldiers from my unit. We stood out pretty well as we were in uniform in a different town. When we asked for the check, we found out that another customer had paid for our meals.

I was very grateful for their anonymous gesture of support and appreciation. At this point, I could only think that my father had laid out the foundation for me to get here.

Thank you to all the service members for your sacrifices to keep our country strong.

Thank you, Dad, for everything you have done for us.