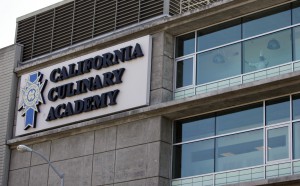 SAN FRANCISCO (AP) — Food enthusiasts have been enrolling in culinary school in growing numbers, lured by dreams of working as gourmet chefs or opening their own restaurants.

For many graduates, however, those dreams have turned into financial nightmares, as they struggle to pay off hefty student loans and find work in a cutthroat industry known for its long hours and low pay.

Now, some former students are suing for-profit cooking schools to get their money back, saying they were misled by recruiters about the value of culinary education and their job prospects after graduation.

“They just oversold it and pushed it. They made misleading statements to lure you in,” said Emily Journey, 26, a plaintiff in a class-action lawsuit against San Francisco’s California Culinary Academy, part of Career Education Corp.’s chain of 16 Le Cordon Bleu cooking schools.

Journey, however, may get some of her money back. Under a pending $40 million settlement in state court, Career Education has agreed to offer rebates up to $20,000 to 8,500 students who attended the academy between 2003 and 2008.

In 2004, Journey was a recent high school graduate, dreaming of opening her own bakery, when she enrolled in a 7-month program in pastry and baking arts at the San Francisco school. Recruiters convinced her it was a worthwhile investment and helped her borrow $30,000 to pay for it.

After finishing the program, the only job she could find paid $8 an hour to work the night shift at an Oregon bakery — “something anyone could have gotten without a culinary certificate,” she said.

Journey, who now lives in Bakersfield, has abandoned her baker’s dream and now plans to attend community college to become a nurse or dietitian. Without the settlement money, she will be paying for that culinary certificate for another 15 years.

“Was it worth the money and the time to have this loan hanging over my head?” she asked. “Absolutely not.”

Two other Le Cordon Bleu schools — the California School of Culinary Arts in Pasadena and the Western Culinary Institute in Portland — also face lawsuits from former students who say they were duped by deceptive advertising, particularly the schools’ job placement rates.

Schaumburg, Ill.-based Career Education denies its recruiting and marketing practices are illegal, but its schools recently changed their policies to “ensure that students understand that we are not promising any specific job outcomes or salaries,” said spokesman Mark Spencer.

The publicly traded company, which operates more than 90 career colleges worldwide, agreed to settle the San Francisco lawsuits because they were too expensive to litigate and distracting to employees, Spencer said.

Enrollment at for-profit colleges and trade schools has surged over the past decade, fueled by federal student aid that makes up as much as 90 percent of revenue at many institutions. Profit-driven career colleges are facing heavy criticism for their aggressive recruiting and marketing practices, as well as their graduates’ low rates of loan repayment.

Students who attend for-profit institutions represented 12 percent of all college students in 2009, but 43 percent of those who defaulted on federal student loans, according to a recent report by The Education Trust, an education advocacy group.

“It’s a business predicated on volume, not quality. How many students can you get to sign on the dotted line?” said Jose Cruz, the group’s vice president for higher education policy. “It’s a debt that takes over their financial life.”

Le Cordon Bleu officials defend the value of a culinary education, saying many restaurants, hotels and hospitality companies don’t have the time or money to train employees.

School officials point to alumni such as Jill Barton, a 2005 California Culinary Academy graduate who recently opened a crepe shop in Santa Barbara, or Gonzalo del Castillo, a 2007 graduate who co-owns a San Francisco tapas bar.

The academy’s tuition and fees range from $21,000 for a certificate in pastry and baking arts to $43,000 for an associate’s degree in culinary arts. Those costs don’t include books, supplies, or room and board.

The school’s website says 48 to 100 percent of graduates find work in their field of study or a related field, depending on the program or methodology.

Critics say many of those jobs don’t pay much more than minimum wage and don’t require formal culinary education.

“It is a ridiculous business decision to attend one of these schools,” said attorney Ray Gallo, who represents plaintiffs suing the California Culinary Academy. “The whole thing doesn’t make economic sense. They know it and they don’t tell you.”

In June, the U.S. Department of Education in June issued new regulations aimed at protecting students who attend private career colleges. Under the new rules, a school can only have access to federal student aid if at least 35 percent of its graduates are repaying their loans — or if graduates’ annual loan payments don’t exceed 12 percent of their earnings.

Critics say the new rules are a small step in the right direction, but don’t go far enough.

“Unfortunately, it’s really a buyer-beware environment for people seeking higher education at culinary schools or other kinds of training programs,” said Lauren Asher, who heads the nonprofit Institute for College Access and Success.

Matt Foist, 46, regrets his decision to borrow $45,000 to attend the California Culinary Academy in 2005, when the Silicon Valley software engineer was looking for a career change.

“They did a great job of selling it to me,” Foist said. “I was kind of tricked into believing that I would become a highly regarded chef in the San Francisco area and that I would make a lot more money than the reality turned out to be.”

After realizing he wouldn’t be able to earn enough to cover his student loans, he decided to stick with software engineering. Five years later, he said he’s barely made a dent in paying off his culinary school debt, though the settlement money will help if it comes through.

Image: In this Sept. 1, 2011 photo is the California Culinary Academy, which is part of the Le Cordon Bleu chain of for-profit cooking schools, in San Francisco. The chain is coming under fire for its marketing practices as its graduates struggle to find culinary jobs and pay off their hefty student loans. Across the country, for-profit vocational schools are facing heavy criticism for former students who can’t find jobs that pay enough to repay their student loans, most of which are subsidized by the federal government. (AP Photo/Eric Risberg)