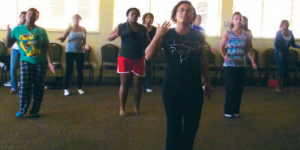 With the fall semester rolling on in full swing, the student organizations on campus have started to gear up. Aggie Showstoppers is one of them.

Sarah Mann, a freshman majoring in Business Administration is the president of the club.

Mann said that the committee takes part in planning different activities like the fundraisers, parties, and plans for the dance team.

“The members of the dance team need to focus on the practices and performances at different events,” Mann said. “That is why the committee takes part in the planning and other activities of the organization.”

The organization performs during half-time shows, Pep rallies, and at other events on campus. Mann said that she is willing to make the team more diverse by its performances on different types of music such as rock, classic, hip-hop, and others. She said that the team is now trying to take part in the Diversity Day.

“We are trying to get the dance team situated for the Diversity Day,” Mann said. “We need to get the team ready now.”

“Everyone should go through this process,” Mann said. “Though I am the president of the club, I will have to be selected by the judges through tryouts to be in the dance team.”

Mann said that she is looking for ten to twelve members on the team. She said that this year’s team would be new.

“In our first meeting we had 22 people show up,” Mann said. “Among them only one had been a member of the team last year.”

Mann said that with its participation in the upcoming Diversity Day, the club wants to let everyone know that it is still here.

“We need to do planning for the upcoming programs of the club,” Mann said. “We are waiting for the dance team to be set and ready to go.”

This is the fourth year of Aggie Showstoppers on campus. The club is hoping to have a dance team ready by September.

Mann said that the club should do more advertising around campus and should get more involved in different events on campus.

“We want the dance team to participate in more events on campus,” Mann said. “If possible, it would be great to take part in competitions too.”