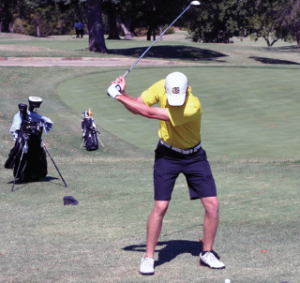 The Cameron Aggie golf team teed off the 2011 fall season at the Coody/West Texas Intercollegiate Tournament. The Aggies had strong performances throughout the week, but fell short finishing in sixth place. Head coach Jerry Hrnciar said that his Aggies had high expectations going into the tournament and started out with solid qualifying scores.

“We had great qualifying going into it,” Hrnciar said. “I think our expectations were to do a little better than we did.”

Though this tournament marked the beginning of a season for the Aggies, Hrnciar joked that this is no excuse for his team to be rusty.

The tournament boasted a great field of competition. Coach Hrnciar said that he thought the best two teams in the country were there.

“What I consider the number one and number two team in the nation were there,” Hrnciar said.      “The National Player of the Year is back for Abilene and Brady was only about three strokes behind him.”

Brady Porter, a junior, led the Aggies in the tournament and finished third in the individual rankings.

Porter opened the tournament with a 66. According to Hrnciar, that was not quite enough to lift the Aggies to a top three finish. Hrnciar said his Aggies are close to where they need to be to make a run in the rankings.

“We are close, we have lots of depth,” Hrnciar said. “We are so consistent; we just never really had a hot round other than Brady’s 66.”

“The second day we had some swing breakdowns and we made some big numbers on about six different occasions that cost us,” Hrnciar said. “It was the difference between being a legitimate third and sixth.”

According to Hrnciar, the four unplayable lies, three hazards and one out of bounds ball was another factor in the Aggies finishing sixth instead of third.

Hrnciar said that the Aggies did not help themselves in the rankings this week, but he said he thinks the team can turn it around.

“We didn’t help ourselves ranking wise, but the only important ranking is the last one of the year,” Hrnciar said.

Hrnciar said that his team planned to finish the season in the top ten. He said that if the Aggies are able to accomplish this they have a chance to win a championship.

“My goal is to be in the top ten,” Hrnciar said, “if we do that we have a chance to win a National Championship.”

According to Hrnciar, the Aggies have more than just a sixth place finish to take away from this tournament. Hrnciar said that he thought there were some good rounds for his men to build on going into the rest of the season.

“Our goal right now is to keep getting better and better,” Hrnciar said. “We had some solid performances, but they could be a little better; if we work on those this week I think we can carry it on the rest of the year.”