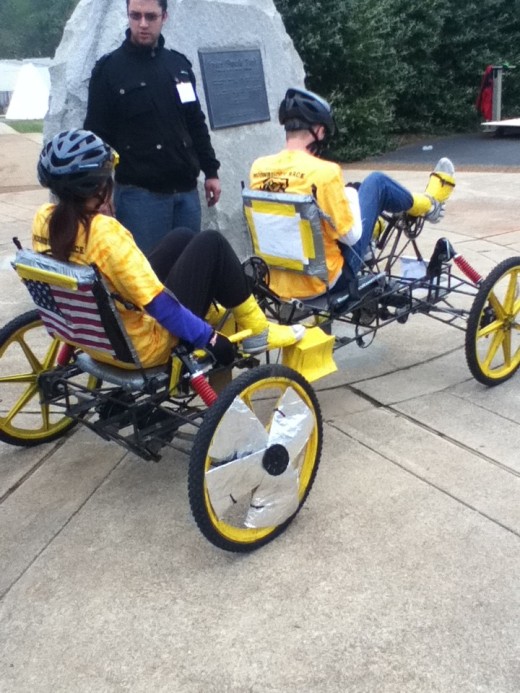 Cameron students shot for the stars and landed on the moon earlier this month at NASA’s 18 annual Great Moonbuggy Race, placing 19 out of 42 and taking home the award for best team spirit.

According to Andrew Duffield, Faculty Advisor, the Great Moon Buggy race was held April 1-2 at the U.S. Space and Rocket Center in Huntsville, Alabama; the place where America’s space program was born.

Duffield explained that NASA’s annual Moonbuggy race is an international competition that challenges students to build a vehicle similar to the original moonbuggy and race it on terrain that simulates that of the moon’s surface.

“The NASA competition challenges students around the world to build and race lightweight, human-powered buggies, demonstrating the same innovation and can-do spirit that put the first Apollo-era lunar rover on the moon four decades ago,” he said.

Senior Engineering and Design Technology major Aaron Cobb acted as captain of the team. Cobb said that the design for Cameron’s moonbuggy was one that he had been working on since his freshman year. He said that the design was originally intended to be in last year’s race, but they had to wait and use the design this year due to crucial parts not arriving in time.

“I began working on my design my freshman year. I finished it the following year and submitted it for a Capstone project to be built for the competition,” Cobb said. “Due to problems getting the needed parts, we were forced to retrofit the old buggy and save my new design for this year’s competition.”

Cobb noted that they began working on the moonbuggy in early March and again ran into problems getting needed parts, receiving some only 36 hours before they were scheduled to leave for the competition.

“In order to pull it all together, a few of us worked two full days in the lab without sleep, working all the way up until we had to load the buggy and make the 12-hour trip to Alabama,” Cobb said. “We pulled into the hotel parking lot at 3 a.m. and continued work until the buggy left the starting line.”

Cobb explained that CU’s team overcame many obstacles before and through the course of the race, but overcame their adversity through teamwork and diligence. He said that was part of what earned them the Best Team Spirit Award.

“We received the Best Team Spirit Award because of everything we did and how we did it,” Cobb said. “We were challenged, sleep deprived, and we had problem after problem arise, yet we worked diligently on our buggy overcoming the impossible.”

Cobb noted that once they worked out all of the kinks in their moonbuggy, they immediately began helping other teams get their moonbuggies ready for the race.

“After getting our buggy in running shape, our work continued; by the end of the competition, we had helped redesign the buggies for two separate teams, Scotlandville Magnet High School from Louisiana and Ryerson University from Canada,” Cobb said.

Cobb noted that, although they did not win first place and were sleep deprived, making it past the finish line and helping other teams do the same was an award in itself and well worth the effort.

“Even though we were tired, sweaty, sun-burned and even weld-burned, we walked into that award ceremony having already received the best award from the trip: watching the teams from Canada and Louisiana, who we worked with hand-in-hand, finish the course,” he said. “That is a feeling of accomplishment that will live with me for the rest of my life and I am just as proud of every rip, tear, and stain we subjected our yellow Cameron shirts to as I am of the wooden plaque NASA presented us with.”