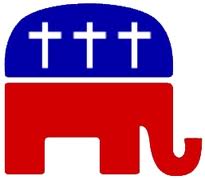 We have come to a point where there’s a fine line that is constantly crossed here in Oklahoma and across the country. This is the line separates spiritual beliefs and secular beliefs.

Over the years, the Republican Party has adopted the idea that it is the political party of Christians. In the heat of the midterm elections, the ideologies have been seamlessly integrated in the fierce rhetoric of politicians, commentators, party gatherings and your everyday citizens across the Bible Belt.

While visiting the churches in our community, people can witness some congregations that saying everything just short of publicly endorsing a political party, a deed that can very well lose a church’s tax-exempt status. A search on Google will turn up a few Oklahoma churches that are under investigation from the IRS for violating the “no political endorsement” rule.

Even in this last election, there were distasteful messages coming from state representatives that were dubbed excusable from their offices because of their Christian affiliation.

What has happened in our political culture is that the messages have bridged a connection between registering Republican and being spiritually correct. The political rhetoric attempts to support reasoning that being a Christian is to be Republican and vice versa.

A major problem occurs when people cannot view a separation between political discourse and views of Christianity. Not all actions and ideals of any one political party or political movement match with the biblical teachings of the Christian Church.

We as a culture should separate the beliefs of religion and politics. I believe that using the Bible as a source can identify answers to some issues, but several policy questions are not directly answered through Scripture. When the exact answer doesn’t exist, opinionated interpretation occurs.

Interpretation never truly means that it is fact. As politicians and candidates are adding their interpretations into rhetoric, they are leading people to believe that because one side is based on Scripture that they are destined to be the party to be in control.

However, just because a politician or a member of a political party claims that they are religious doesn’t necessarily prove that they are a practicing believer of faith. This applies to any member of any party.

All people are allowed to have opinions and shouldn’t be degraded due to a political choice. A political party doesn’t identify a person’s faith. Being of a certain party doesn’t make a person more or less religious.

I have my personal opinions that will align myself with certain candidates. My ballots have never been casted as straight party. After researching the candidates, I vote for whomever best fits my Christian-based view of a leader. No candidate has ever been or will ever be perfect.

Our Bible Belt culture and political culture are getting dangerously close to being the same. Citizens must learn to separate the two belief systems to in order to prevent further corruption of our spiritual systems.