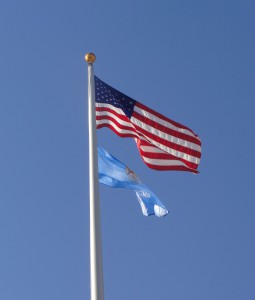 I once read a narrative about a young Asian boy and his grandfather. The details are a little fuzzy to me, but the thing I do remember was the last sentence of the story. The story closed by saying, “I give you America.”

This simple statement has stuck with me over the course of the past few years and made me question what this place I call home is all about. At one time, this country was a place where small towns flourished, children played in the streets, people knew their neighbors, dreams were born and above all, people respected the flag and what it stood for.

The American dream was alive in every child as they walked to school in the morning or sat down to dinner at night. This intangible dream has made the United States what it is today and for many, this dream has seemed to fade away.

The America I give you today is divided more than ever by politics, race, gender and religion. Everything today seems to be left or right, liberal or conservative, racist or sexist and democrat or republican. What happened to just being an American?

We are reminded daily of our differences whether it be on television or in the newspapers. Politicians seem to be more concerned about getting re-elected than solving our problems. I ask myself constantly, “Why are we arguing all the time?”

Is this not the same country where perhaps the greatest plan for government ever written was constructed? Is this not the country that put a man on the moon? Are we no longer the land of the free and home of the brave? There is no doubt in my mind we are still that country, but I realize now, much like in 1861, we stand on the brink of civil war.

The division we are experiencing now has put brother against brother and American against American once again. It seems we are standing toe to toe with one another waiting for the other to blink. Something or someone is eventually going to have to give in.

The America I see is not as divided as many think. The American spirit is alive and well and I know this because I have seen it. I saw it on the Fourth of July in the eyes of a young boy while fireworks lit up the sky. I saw it last year at a college graduation as a girl ran across the stage with her family’s first college diploma. I saw it when my grandpa had to wipe away a tear from his eye as he told me about his experiences on the shores of Okinawa, and I saw the American Spirit in full stride on Sept. 11, 2001. The American Spirit is still alive in every one of us, and we can make a difference.

Merle Haggard summarizes the philosophy that I think every American should adopt in a country song. The songs lyrics say, “If you’re running down my country man, you’re walking on the fighting side of me.” As Americans, we should feel a sense of pride for our country and be willing to follow the leaders we have elected.

From now on, I think every American should make a stand for what is right whether it be considered conservative or liberal. If we want to progress as a country this willingness to break political bonds is imperative.

The America I envision is not divided by politics or race. It is instead united by our love for freedom and strengthened by our differences. I hope to someday look at my family and proudly say, “I give you America.”