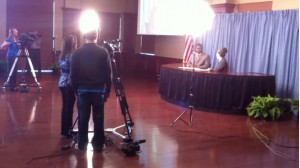 During a news broadcast with a live studio audience, Cameron University’s student-run in-house television network, CUTV, helped Cameron President Cindy Ross announce plans for a major renovation of the former Student Union and gifts totally $1.375 million earlier today. During the newscast, CUTV producer Michael Faggett, a senior communication student from Dallas, conducted a live interview with Ross where she revealed plans to transform the former Student Union into the Academic Commons, announced gifts received to date totaling $1.375 million, and publically launched a campaign to reach the fundraising goal of $2 million.

“The Academic Commons is an important next step in continuing to be the University of Choice,” said Ross. “When complete, the Academic Commons will join the McMahon Centennial Complex, University Library and McMahon Fine Arts Complex to form a core of centrally located buildings with extended hours of operation to better serve our students and the community.”

The Academic Commons will unite Cameron’s print, television and online production capabilities, which are currently spread across campus, in one location and will be the new home to the Cameron Department of Communication’s cutting-edge convergence journalism option. Today’s news seekers want instantaneous results found on one centralized news source. Convergence journalism provides a one-stop, all-inclusive resource that utilizes print, broadcast and multimedia tools to fill that need. Cameron’s convergence journalism option prepares students to be successful in the rapidly changing world of high-tech news, where newspapers and television and radio stations are seeking employees who understand how to work in this new and highly competitive environment.

AggieCentral.com is Cameron’s student-operated convergent media news resource. During today’s newscast, Cameron’s student reporters, armed with iPads and laptops equipped with the latest editing software as well as video cameras, demonstrated how quickly news can be broadcast utilizing cutting-edge technology. Seconds after President Ross concluded her remarks, an in-depth story about today’s event was posted on AggieCentral.com. Attendees were able to watch video directly on their iPhones, Androids, or iPads.

The renovated building will accommodate a broad range of academic services with extended hours of operation including a computer laboratory, a student tutoring center for multiple academic disciplines, a campus-wide information technology help desk, modern classrooms and an adjunct faculty support center.

“The Academic Commons will be an academic building that will literally touch each and every student who attends Cameron University,” said Ross. “With its tutoring center, it may well be the building in which a student develops the skills to be a successful college student. With the computer labs, students will spend countless hours researching and writing papers. With the six classrooms, this will be a very popular location for student courses. Student success and enhanced student learning are the primary factors in the design of the Academic Commons.”

The exterior appearance of the building will be updated to match the Cameron palette, including the addition of large arched windows and entryways featuring peaked roofs. Two inviting patio spaces will also be incorporated, providing students and faculty a comfortable location to enjoy the outdoor environment.

“These four foundations have taken a lead role in demonstrating their support for this project as evidenced by their generous grants,” said Ross. “We are extremely appreciative of their leadership in this campaign as they alone have helped us to surpass the halfway point of our campaign at this early date.”

Since 1963, The McMahon Foundation has been a steadfast supporter of Cameron, contributing more than $15 million to Cameron University, including the largest single gift – $4 million – in the university’s history. The McMahon Foundation has provided funding for scholarships; support for academic programs, KCCU and Athletics; and construction of numerous campus buildings, including the McMahon Centennial Complex, the Fitness Center and the Louise D. McMahon Fine Arts Complex.

The Cameron University Foundation exists to help the university realize its mission of providing a top quality education and meet the goals set forth in “Plan 2013: Choices for the Second Century,” Cameron’s strategic planning document. The foundation plays an integral role in Cameron’s ability to implement vital initiatives, campus enhancements, and programs, all designed with student success in mind. Previous gifts include $250,000 for construction of the McMahon Centennial Complex (MCC), scholarship funding, support for endowed faculty positions as well as support for numerous initiatives such as the Cameron University Honors Program and the university’s Emergency Loan Program for students.

The generous gift from the E.L. and Thelma Gaylord Foundation marks the foundation’s first donation to Cameron University. The son of a frontier Oklahoma City newspaper publisher, E.L. Gaylord inherited The Oklahoman in 1974 and was regarded as one of the most respected newspaper publishers in the country. From there, he built the Gaylord Entertainment Company, a national media and entertainment empire. Gaylord and his wife Thelma were among Oklahoma’s leading citizens. Their contributions to various cultural, educational and charitable organizations have significantly enriched the state of Oklahoma. The name Gaylord is synonymous with excellence in journalism. Therefore, it is significant that the foundation has chosen to recognize Cameron’s leadership in the academic front of convergence journalism.

Support from The Walton Family Foundation was facilitated by one of Cameron’s valued community partners, Arvest Bank. Gifts from the foundation have benefited Cameron initiatives numerous times in recent years. The foundation previously contributed $10,000 to Cameron’s unprecedented Changing Lives campaign and $5,000 for campus beautification, in addition to being the sole benefactor for the renovation of the Student Activities Building in 2004.

“The Academic Commons will provide Cameron students an invaluable resource to help them succeed,” said Ross. “With the state’s current budget situation, it is crucial that we raise private funds to pay for a substantial portion of this renovation.”

The Academic Commons adds to the $55 million in construction that has transformed the Cameron campus over the past eight years. The Center for Emerging Technology and Entrepreneurial Studies (CETES), Cameron’s primary economic development effort, the CETES Conference Center, Cameron Village, the School of Business Building, the MCC and the Bentley Gardens have each played a part in Cameron’s status as the Location of Choice for community events and as the University of Choice for students throughout Southwest Oklahoma and beyond.

The cost to transform the 49-year-old building into the Academic Commons is estimated to be $4.2 million. In addition to private donations, funding will be provided by Cameron’s building and capital equipment funds and the Oklahoma State Regents for Higher Education Master Lease-Purchase program.

Construction will begin in June and conclude July 2012. The Academic Commons will open in time for Fall 2012 classes.