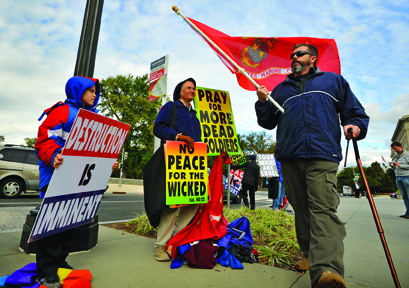 The vote in one of the more historically controversial freedom of speech U.S. Supreme Court cases was 8-1. On March 2, the Supreme Court ruled in favor of Westboro Baptist Church allowing them to continue holding protest rallies at the funerals of dead soldiers.

This was a contradiction to the previous decision by Federal District Courts, which awarded the family with monetary payment to compensate for any emotional distress. Westboro Baptist Church protested at the funeral of Marine Lance Cpl. Matthew Snyder, a soldier who was killed in action during the war in Iraq. The Snyder family followed these actions with a lawsuit against the church, and it looked as if they would win. The church’s problem: the “Don’t Ask, Don’t Tell” policy currently in place in the U.S. Armed Forces and the nation’s general welcoming response to the homosexual lifestyle. The church had no personal problem with the solider, but rather the organization he served in general.

The church, which is based in Kansas, has held protests in each of the 50 states. The church and its members are certainly trying their best to broadcast their beliefs.

Meanwhile, the Snyder family grieved their son’s tragedy to the sound of shouts from a passionate crowd. The family grieved for a son who fought to protect the very freedoms that Westboro Baptist Church was exercising by protesting. Where is the gratitude? If the church has a problem with a U.S. military policy, find a way to protest the military policy without disrespecting a solder that has valiantly served his country to the point of death.

As a Christian and churchgoer, I find this story especially offensive. This is not the only rally that Westboro Baptist Church has organized. I understand that the policies and practices they are protesting go against their beliefs, but this is not the way to show their disdain. The object of a Christian’s interactions with others is to show love to the people around them. Westboro Baptist Church is behaving in such a way that embarrasses a large number of people who supposedly share the same faith.

I fail to realize the appeal that a protest at such a location provides to the people that they are trying to reach. In addition, as a military child, I am mortified by the disrespect that people are showing for this soldier, his family, and their nation.

I would have been in enough pain if my father had died while serving in Iraq, but the presence of such a group would have significantly increased the suffering that my family would have had to endure. In addition to their disrespectful protests, the church has also been known to show disrespect to the American flag. These kinds of actions can only hurt the nation.

I simply find it grievous that such a case must even be brought in front of the court systems in the first place. However, as vulgar as this behavior is agreed to be by the Justices, legally there is nothing the court can do except restrict the protesters’ distance from the funeral.

The church’s actions most likely will not change. The emotional hurt will not be spared until the church realizes the harm it is doing to the family, their church and the nation.

To Marine Lance Cpl. Matthew Snyder and his family, I am truly sorry for the disrespect that was shown at your loved one’s funeral. A great number of people appreciate his service and valor. Thank you for fighting to protect our country and the freedoms that Americans continue to enjoy.