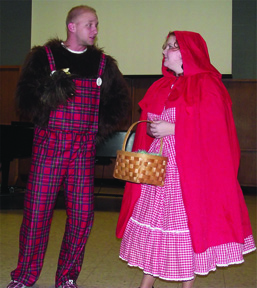 The story of Little Red Riding Hood is well known by many. It has been passed along to children through many generations. At 3 p.m. on March 6, the story was told in a different way in the McCutcheon Recital Hall at Cameron University.

The story of Little Red Riding Hood was told as a children’s opera. The opera was presented by the Department of Music and the Southwest Oklahoma Opera Guide. Dr. Earl Logan, music director of the opera, said that the story of Little Red Riding Hood is a very old tale from medieval times in which a little girl meets a wolf in the forest. The wolf later attacks the girl and her grandmother, who are then rescued by a woodsman.

“This story is gentler in the opera. The wolf is not as bad as portrayed in the original story,” Dr. Logan said. “The story has a moral for the children. They should not talk to strangers because it can be dangerous.”

The show at the McCutcheon Recital Hall was mainly for the parents and relatives of the singers who participated in the opera. Dr. Logan said that the opera is scheduled to be performed in five Lawton public schools. The opera had amused the children of three public schools before the Cameron performance.

“Today’s opera is mainly for the family. There will be more adults and few children in the audience today,” Dr. Logan said.

Jonathan Phelps, a senior majoring in Vocal Performance, played the role of the wolf.

“I got the children to laugh when I performed in the public schools,” Phelps said. “There was a boy who cried when he saw me as a wolf.”

Anjelika Ramsdell, a junior majoring in Vocal Performance played the double role of both mother and grandmother of Little Red Riding Hood. The audience laughed to see the mother talking to the grandmother on a cell phone.

“It is fun to perform as a mother and grandmother in the story,” Ramsdell said. “I got the children to laugh when they saw me dance but they really seem to like the wolf.”

Tammy Cornish was one in the audience for the Sunday afternoon performance. She said that she came to know about the opera from Sabrina’ mother.

“I liked the opera a lot which was really cute and made me smile a lot,” Cornish said.

Dr. Logan said that he chose the story of Little Red Riding Hood because it is perfect for the children.

“They love it. They are young and they laugh, clap and sway with the music,” Dr. Logan said. “There are so many people who want to hurt the children and I want them to know about that and be aware of it. It also carries the moral for the children to be kind to their parents and grandparents.”

Dr. Logan said that the CU Music Department presents two operas a year. He said that the fall opera is more serious and the spring opera is for the children. The operas performed in the public schools are free in assistance with Southwest Oklahoma Opera Guide.

Yiuka Chan Spannagel, a graduate of Cameron and Dr. Logan’s co-coordinator, accompanied the singers on the piano. The opera was about 35 minutes long.