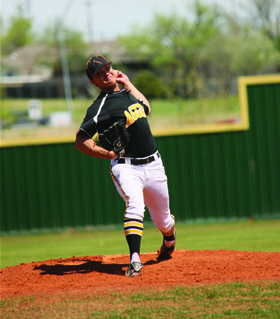 The Cameron Aggie baseball team has had a dominant start to their 2011 season, earning a 9-1 record after facing off against their first three opponents.

The men opened the season at home with a sweep in their four-game series against the Northeastern Oklahoma State University (NSU) Riverhawks.

The following day, the men saw more double-header action. In the first contest, the Black and Gold were down 5-0, but scored seven runs in the seventh inning to give them the 7-5 victory.

The Aggies kept their win streak alive in the final game of the series, topping NSU 7-3.

The team next traveled to Edmond to take on the University of Central Oklahoma (UCO).

CU won the opening match-up of the series 5-2. The Aggies would go on to split the next two games played, winning the first 9-5 and dropping the second 8-11.

The team next took to the diamond with the home field advantage during the Super Homecoming weekend. The men competed in a three-game series against the Greyhounds of Eastern New Mexico University (ENMU) and earned their second sweep of the season.

On day one of play, CU had a 5-0 shutout over ENMU. The Aggie bats really heated up on the following day when the squad defeated the Greyhounds 8-3 and 16-3.

Cameron baseball coach Todd Holland said he is pleased with what he has seen from his team so far.

“Early in the season you never really know how it’s going to go, but these guys are resilient. They never panic. They don’t press. They just play consistently,” Holland said.

Holland also acknowledged that good offense is the story of this year’s Aggie baseball team.

“Most of the time other teams realize that offense is it for us. We saw that with Eastern New Mexico. They struggled to keep up with us at the plate,” Holland said. “Obviously, we want the best of both worlds, but right now I’m willing to give up some defense to have great offense.”

Newcomers Chase Larsson and Kenny Held have been outstanding offensively for the Aggies. As of March 3, the men lead the squad in several categories.

Larsson has been hitting the most consistently for CU. The centerfielder had a batting average of .471 after the first 10 games played. His slugging percentage was the team’s highest at .941. The Vancouver native also led the team with his on base percentage as well as stolen bases.

Holland recognized Larsson’s excellent numbers and conceded that the Lone Star Conference is an offense-oriented conference.

“This is a hitter’s conference,” Holland said. “You have to hit well in order to keep competing.”

Held has also shown off his offensive prowess this season.

As of March 3, Held was the team’s homerun, RBI and runs leader. He was also tied for first for the number of hits on the season with 17.

The baseball coach said he likes the statistics Held has racked up so far.

“Kenny is a free swinging guy. He likes to hit the ball and, when he does hit it, he hits it hard and it goes a long way,” Holland said. “When he’s on, he’s on.”

First baseman Andy Garcia has proven to be a heavy hitter as well.

During the first 10 games of the year, the 6-foot-3 junior had a batting average of .459 and tied with Held for most hits.

Defensively, junior James Rhodes has been lethal from the mound for CU.

After his first five appearances as an Aggie, Rhodes had ERA of just 2.41 and struck out some 24 batters.

Holland is delighted with what he has seen from Rhodes.

“Rhodes has been doing a wonderful job. He’s started a couple of games and came in as a reliever a few times and he’s done a great job with both,” Holland said. “He’s the kind of kid that just wants to play baseball – in any situation.”

CU last competed in a three-game series against West Texas A&M March 4-5 in Canyon, Texas. The Aggies will next face Newman University on March 11 at Cameron’s own McCord Field. The first pitch will be thrown at 1 p.m.