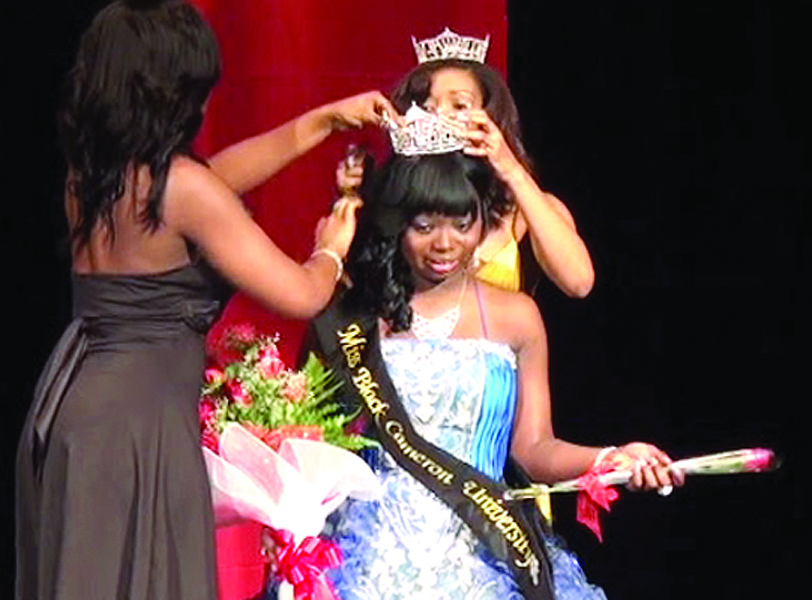 The Ebony Society and Cameron University hosted Miss Black CU Pageant on Saturday, Feb. 5. The pageant was held in the CU Theatre.

The program started at 7 p.m. with the introduction of five contestants. The contestants were wearing red dress when they introduced themselves and talked about their platform. The contestants for Miss Black CU 2011 were Neila Ettienne, LaWanna McWilliams, Leah Mazur, Javee Morris, and Chaira Flanders.

Brandi Goldsmith, President of Ebony Society and Michael Faggett, senior majoring in Communications were the mistress and master of ceremony for the evening. Following the welcome note by Goldsmith, the audience and judges stood up and sang the Black National Anthem, Lift Every Voice and Sing.

After the solo song performance by Nicole Diggs, Miss Black CU 2010, the current participants walked on the stage on fitness wears. This round was not judged. The segment was dedicated to promote the physical fitness and healthy life style.

The hosts then introduced the panel of judges for the Pageant. The judges were Blake Red Elk, Cheryl Monts, Matline Butler-Liverman, Eugene Harris, and Kay Cudjoe.

Ambassadorial Wear was the first judged round of the Pageant where the participants represented the famous black women who had achieved name and fame in their respective fields.

The last segment of the Pageant was Evening Wear and On-Stage Question & Answer round. On this round, the participants came on the stage wearing evening gowns where they were each asked a question.

“I definitely have to say that I am really overwhelmed and there are no words to describe how I am feeling right now.” Flanders said, “My platform is self respect and I want to inspire the youngsters saying that if I can achieve my dreams then they can also achieve theirs.”

Ettinee, a 26-year-old Theatre and International languages major was the 1st runner up of the Pageant. She was also the winner of the title Miss Congeniality.

“This Pageant has been a good journey for me and being a 1st runner up has encouraged me to take part in more competitions in the future,” Ettinee said.

Leah Mazur, a 20-year-old Technical theatre major was the 2nd runner up. She also won the Directors award.

“I am really excited and it has been a great experience being a part of the pageant.” Mazur said.

Kay Cudjoe, one of the judges of the Pageant said that the program has been outstanding.

“I can see that the contestants had put quite a bit of time for this competition and they had gone through different challenges in their lives.” Cudjoe said. “I think the winner represents Cameron University very well and being a freshman she has an opportunity to bring the issue of self respect among the youths.”

Amanda Todd, a Cameron graduate was one of the audience members of the evening.

“This one was the best one I had ever been to. The program was seamless and every participant was phenomenal,” Todd said.

‘Making our dreams a reality’ was the theme of the Pageant this year. Mu Alpha Chi Fraternity, Inc., and Godly Influence performed during the event as the featured guests.