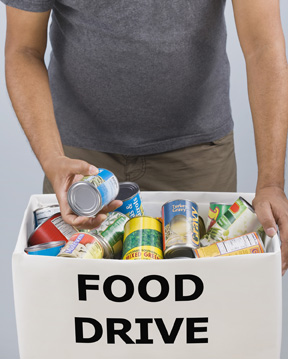 For many people in the Lawton area, going with little or no food at all is an immediate reality. However, the members of Cameron language honors society Phi Sigma Iota are taking a stand in Lawton’s fight against hunger.

“The canned food drive for the Lawton Food Bank had already been established before I joined the organization,” Carter said. “I would think it simply has become a tradition, in fact, a very valuable tradition.  Hunger is not necessary, here and today in this country.  Even if one can afford only a can or boxed item of food, collectively, it will help.”

The Philanthropy 400 report shows that donations among the U.S.’s top charities decreased by 11 percent in 2009. The decrease in giving leaves non-profit organizations searching for ways to provide their services on depleted resources. Food banks in Oklahoma are no exception.

“I believe there is an increased need for food,” Carter said.  “One only has to read the newspapers or watch the local TV stations, to find out that the food banks and other helpful organizations are in greater need and busier than ever.”

The increasing need for donations in turn requires greater involvement from the local community. Phi Sigma Iota president Geraldine Brady views food drive as a chance for everyone to take part in helping the less fortunate.

“Food drives raise awareness of hunger in the community,” Brady said. “We collect food for people in need and play an essential role in the fight against hunger, and I am proud to be a part of it. Phi Sigma Iota has had a long tradition of helping those in need. We believe strongly in engaging with the local community not just through foreign language awareness but through community service.”

When viewing the needs in the community, Carter believes that giving to the less fortunate is not a difficult task.

“There is a story of a bird who had helped many others, but in the process lost all his feathers,” Carter said.  “The other birds each gave him a feather of their own.  In a short time, he was beautifully feathered again, and the other birds did not notice the absence of those individual feathers.  I believe this could be applied to this situation also.”

Phi Sigma Iota also has made it easier this semester for anyone who desires to make a donation. Those wanting to participate in the food drive won’t necessarily have to cart their canned goods up to the Language Learning Center in Nance Boyer.

“This semester, we also will be making donation pickups, in case a department or group on campus would like to collect food donations and then contact us,” Brady said. Each Wednesday from Nov. 1 – 19 is designated as a pick-up day for donations.

Non-perishable items such as canned fruit, vegetables or meat, soups, peanut butter, cereals or boxed dinners are among the goods accepted in the food drive. Brady also said that household products, such as toilet paper, deodorant, shampoo and soap are needed.

“We will be accepting donations from Monday, Nov. 1 through Friday, Nov. 19, which is three academic weeks, though we would be willing to accept food donations for the Lawton Food Bank at any time,” Brady said.

Any student wishing to bring in their own donations should take them to room 2011 in the Language Learning Center on the second floor of Nance Boyer. Those who would like to have their canned goods picked-up should contact Geraldine Brady at 581-2804 or Geraldine.brady@cameron.edu, or may contact Jutta Carter at 581-2565 or jcarter@cameron.edu.