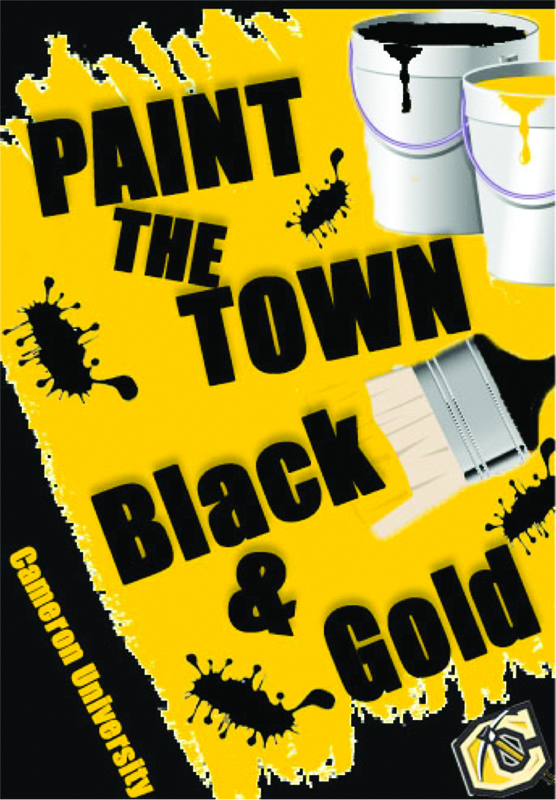 In cities with large universities such as Norman, OK, or College Station, TX, it is fairly obvious that the communities surrounding their respective universities possess a great deal of school pride.

In order to promote similar school pride and community involvement in Lawton, Cameron’s Student Government Association (SGA) began work on a program to promote Cameron University to the businesses and organizations of CU’s surrounding area. The idea for the program, which became known as Paint the Town Black and Gold, was formed in Spring 2008 and implemented in Fall 2009.

Jennifer Holland, Vice President of Student Services and current overseer of the program, described how students began soliciting community involvement as a way to strengthen the visibility of the university throughout the area.

“A group of students felt strongly about getting our community more invested in our campus,” Holland said. “When you go to some college towns, you can tell it’s a college town; you drive into town and you know there is a university there. The students feel that it is important to approach our area businesses to ask them for their support.”

According to Holland, there are several ways for local businesses to show their support and become involved.

“You’ll notice that several of the local businesses display ‘Proud Supporter of Cameron University’ banners,” Holland said. “That is all we asked initially, but then we considered other options, such as flying a Cameron flag or offering discounts for students. Each business has individually decided how they want to support the university. Several have decided to offer discounts.”

Indira Williams, a Psychology junior, said that she would describe the Paint the Town Black and Gold program as businesses advertising the university.

“The businesses become partners with the school,” she said. “The program is a way they can give back to the community by supporting the school.”

Williams also said that a business might gain new customers by supporting the university through Paint the Town Black and Gold.

Shameka Guiden, a Sociology freshman, said that she has a positive opinion of businesses that she knows support the university.

“It makes me think places are student-friendly,” Guiden said. “I’m more likely to a business that supports the university, especially if it offers discounts. I’m always looking for ways to save money. I’d like to see all of the local businesses support the school.”

Holland expressed the need for students to continue to get involved with the program as it continues to expand throughout the community.

“It’s something we’re going to have to keep working at,” she said. “There are certainly places we have not been yet. We’d love for more students to get involved.”

Students can find a complete list of businesses involved with Paint the Town Black and Gold at www.cameron.edu/paintthetown.
Those who are interested in participating with the program should contact Jennifer Holland at 580.581.2244, or the Student Government Association at cusga@cameron.edu.