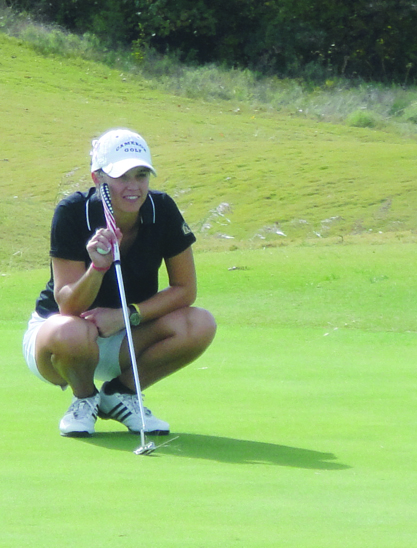 The Aggie golf teams have played in their last tournaments of the fall season.

The women finished their season at the Cameron-hosted Intercollegiate Tournament, which was held on Oct. 25-26 at The Territory in Duncan.

Although CU had the home course advantage, the women had a disappointing performance with a 14th place finish.

The Aggies were forced to deal with tough conditions on the opening day, facing extreme wind.

Women’s golf coach Rick Goodwin said he was pleased with how well Johnson and Whan dealt with the wind, but thinks the women have the talent to have put forth a better performance. Goodwin also said the coaching of the team’s Graduate Assistant Marrick Wooten was essential in the tournament.

“I’m very disappointed with our finish,” Goodwin said. “We’re better than that, and I’m prepared to take part of the blame. As the tournament’s host, I didn’t have time to coach like I would have preferred. I don’t know what I would have done without Marrick.”

Most of the Aggie women were able to improve their scores on the second day of play, when the wind was no longer a factor.

Johnson shot a 73, which allowed her to finish the event in a tie for seventh. Freshman Aleesha Holden had the most marked improvement, shaving 11 strokes off her first day’s score and firing a 78.

Goodwin was encouraged by both of the women’s second day rounds.

“Kylee has really carried the team on her back this season. She had a really strong finish and has a lot to build on,” Goodwin said. “Aleesha played well on the second day too. She shot a career low, and that’s really going to pump her up for the spring.”

Looking toward the spring, Goodwin said his team needs to work on their short game in order to be more competitive.

“Putting, putting, putting – we need to improve our putting,” Goodwin said. “Anytime we had an opportunity, it slipped through our fingers. If we can make our putts, we can play well.”

The CU men also closed out their season Oct. 25-26. The men last competed in the St. Mary’s Invitational, which was held in San Antonio at the Bayonet and Blackhorse Golf Course.

The men, like the women, had an unusually substandard performance, placing ninth.

“I don’t know what happened. Our practice round was so good, but the next morning it all went south. Everyone just went into into a slump, and I couldn’t seem to do anything to help,” Hrnciar said.

Senior Jason Timmis managed to set himself apart from the team by placing seventh and cranking out three great rounds of golf. On the first day of play, Timmis shot 71 and 72, and came back the next day to shoot a 75, which was just three over par.

Hrnciar said his was delighted with how Timmis played the course.

“Jason played very well. He once again showed that he is one of the best players in the region,” Hrnciar said.

Hrnciar acknowledged that the men’s disappointing finish will have a bearing on the conference and regional rankings, which will make their post-season goals for the spring more difficult to achieve.

“We have a challenge ahead of us in the spring,“ Hrnciar said. “But, we have the talent. We just have some work to do.”