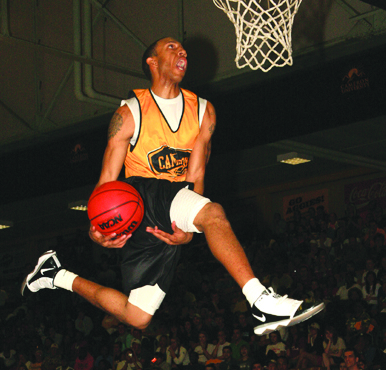 After rougly a few weeks of starting practice for the upcoming season, head men’s basketball coach Wade Alexander still preaches the same message to his team since he took over in 2008: rebounds, care of the ball, and play defense.

The strategy is the same for Cameron’s men’s basketball, but the roster is changed.  Seven players returned from last season’s 10-16 team.

Among the returners is guard Milt Garner, who led the team in scoring last season averaging 15 points per game. Guards Niko Vukadinovic and Jonathan Patino return as well, along with forwards Nate Murray, Terry Dawson, Trevor Smith and Vinisius Telo who returns from a season-ending injury.

Alexander said the returning players have been key in helping the newcomers adjust to both the team’s system and his expectations.

“Leadership is probably the best thing we’ve got right now,” Alexander said. “The returners prepare the newcomers for what we are doing in these practice sessions.”

“Craig has played well at the toughest position,” Alexander said.

With the newcomers and seven returners, Dawson and Murray are the only seniors on the roster. Alexander said with the numerous underclassmen on the roster, he expects the team to endure some struggles early in the season.

“We are a very young team,” Alexander said. “We may have growing pains early, but we want to play our best in January and later in the season.”

Part of the growing pains include finding the rotation for the team. Garner, Murray and Vukadinovic started games last season for Alexander, but with a new roster Alexander said he is looking for the best lineup for the team.

“Right now we are trying to find the right combo,” Alexander said. “We want our starters to hustle, play defense and dive for lose balls. Once we get there, we will be all right.”

With a virtually new roster and after going without a conference win last season, the Lone Star Conference picked the Aggies to finish sixth in the North Division. According to Alexander, the rankings are a motivating factor for the team.

“Other talent doesn’t scare us. Other teams outhustling us scares us,” Alexander said. “We want our players to play hard and be physical. We want to be the team that has the talent and outhustles our opponents. Those things overcome talent.”

The Aggies’s first game is on Nov. 12 at home against Texas A&M-International. Alexander said he looks for the team to play hard in the first matchup of the season.

“I look for the team to come out and compete. The win-loss column is not as important right now as hustling and getting after it,” Alexander said. “We’re ready to play.”