Cameron University theatre students present “My Fair Lady” at 7:30 on Thursday, April 22; Friday, April 23; Saturday, April 24 and at 2 p.m. Sunday, April 25 in the CU Theatre. The musical is something Professor of Theatre Arts Dr. David Fennema always wanted to direct at Cameron, he said.

“We decided on ‘My Fair Lady’ because it will probably be the last musical I will direct at Cameron,” Dr. Fennema said. “I am tentatively planning on retiring at the end of next year, and we work our musicals every other year. I do one every other year and [Professor and Chair of Theatre Arts] Scott Richard Klein does one every other year. So, I wanted to do something I really wanted to do. This is one of the musicals I have always thought of doing but never had a chance.”

“My Fair Lady” is a romantic comedy that has won six Tony awards. The musical is an adaptation of George Bernard Shaw’s “Pygmalion” in 1906, and Shaw was very concerned with language when he wrote this play.

“He felt the British, at that point in time, were getting sloppy,” Dr. Fennema said. “So he wrote this play about language.  It is all about the importance and means of establishing your rank in society. Your speech helps establish that rank.”

The musical is set in 1912 London with a total of 32 Cameron students working as the cast and crew.

“At this time, we are in a true proscenium production,” Dr. Fennema said. “In other words, you will have a curtain, you will walk into the theater, you will hear an overture to the musical and the curtain will open with the show going on from there. So it is traditional in that stance.” 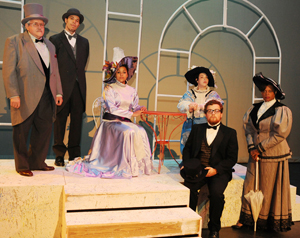 The musical has two different ways to be performed, and CU students are bringing the original script to the stage instead of the movie version.

“The movie version has a couple of changes in the order in which the numbers are presented,” Dr. Fennema said. “The movie version, of course, can do a lot more because they can do more with a camera than we can on the stage. Our challenges are to move the show through and try to keep it from not becoming draggy. We don’t want to have the audience sitting there while the set changes are going on, that type of thing. It is a major challenge because the set changes for the show are very, very large.”

There are 11 different scenes in the play. Cameron’s theatre crew for the play had to come up with reasonable scenery to shift from each scene to create a new atmosphere.

The students putting on “My Fair Lady” seem to think highly about presenting the show to the rest of Cameron, Dr. Fennema said.

“I think the students from my point of view are very, very positive about the show,” he said. “They have been very dedicated to it. They have been there for rehearsals, have really learned their lines and have worked very hard on the show. I think we will have something to be very proud of when we get finished.”

“They have to have accents to play both types,” Dr. Fennema said. “So they are becoming very aware of how different each accent is.” 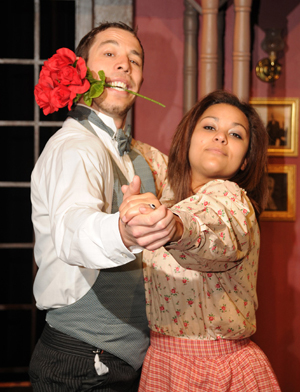