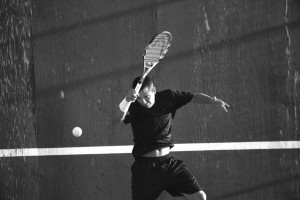 Cameron’s tennis season is officially underway and both the men’s and women’s teams have had strong starts to the year. Both teams fought through freezing temperatures in their final match of February to reach notable victories over the Bison of Oklahoma Baptist University (OBU).

The men defeated OBU in thrilling fashion on the Bison’s home courts in Shawnee and posted a final score of 5-4.

Cameron picked up an outstanding win at the no. 2 doubles position, with Thomas Peixoto and Manuel Barroetavena defeating OBU’s Sergej Babic and Marko Stanic 8-3. However, the Aggies would go on to drop their doubles matches at the no. 1 and 3 spots.

Since the men were going into the singles matches down 1-2, the Aggies felt mounting pressure to have strong individual performances.

Singles play started out well for Cameron, with freshman Jorge Gerosi outplaying Scott Milner at the no. 4 position.

Gerosi won the first set 6-4 and left no doubt that he was the superior player after bageling Milner in the second set. However, the Bison would take the matches at the no. 2 and 3 spots, which gave OBU a 4-2 lead, making the three remaining matches must-wins for the Aggies.

Senior Diego Troiano was the first of the three to claim victory for Cameron. Troiano outlasted Babic at the no. 1 spot, recording a 4-6, 6-1, 6-3 win.

Barroetavena and Jeff Sasser then grinded out the needed wins for the Aggies at the no. 5 and 6 positions, winning 6-2, 6-2 and 6-2, 6-3 respectively.

Tennis coach James Helvey said he was pleased with his team’s victory over the Bison, especially considering the weather conditions on the day of the match up, but he also acknowledged the strength of the OBU team.

“The weather conditions were tough. It was really cold outside. OBU played really well though, and I’m not going to take that away from them,” Helvey said.

The women also had an impressive win over OBU. The Aggies defeated the Bison convincingly, winning 6-2.

Cameron had a solid start to the day, taking all three of the doubles matches. The much-talked about no. 1 doubles pair of Amanda Moberg and Julia Puckhaber did not disappoint. The duo overpowered OBU’s Paola Costa and Lillian Ferriera 8-6. Moberg’s momentum carried into her singles match, where she once again dispatched Costa at the no. 1 position with a 6-4, 6-4 victory.

Freshman Elvira Sholles, who was unable to play in the women’s previous match just days earlier due to illness, showed she had made a full recovery when she took it to OBU’s no. 3 player Camber Robinett. Sholles handled the match with ease and defeated Robinett 6-2, 6-1.

Cameron’s Sara Flores, who played at the no. 4 spot, produced the team’s final singles victory. The Aggie senior edged out Mariana Rosa 6-1, 7-5.

The Aggies dropped their matches at the no. 2 and 5 positions but still led the Bison 6-2. Because the Cameron women had already clinched the win, the match at the no. 6 spot was not played due to the harsh weather conditions.

Helvey was satisfied with the team’s performance and was delighted that the women were able to get a match in after all the rescheduling that weather conditions have caused the team to face.

“The women played really well, but just being able to play is really important for the team right now,” Helvey said.

Helvey said he is happy with the level of play both teams have produced so far this season and is pleased with what the new players and returning players bring to the team.

“The younger players are getting better with every match, and the returning players have really stepped up and are doing what they’re supposed to do,” Helvey said. “Everyone is working really hard.”

Though Helvey acknowledged there are some areas of improvement that each team can work on, he said the best way to address those issues is to get in more match play.

The Aggie men will next be in action on March 10 in Emporia, Kansas when they take on Emporia State University. The women can be seen battling Tarleton State University on March 9 on the CU tennis courts.