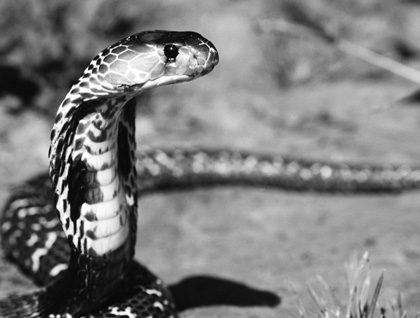 A Cameron University student was taken into custody on March 3 after being charged with growing marijuana and possession of illegal deadly vipers.

According to Lawton Police Detective Jason Roberts, police arrived at the home of 37-year-old Michael Eckert while investigating a traffic accident earlier in the morning. The troopers were investigating a possible hit and run accident around 1:10 a.m. near Northwest Homestead Drive and Waterford Road. According to a Lawton Police report, Eckert picked up his friend after the accident and drove around.

Roberts said police discovered Eckert’s information in the vehicle, which lead them to his residence in the 700 block of Northwest 32nd  Street. Police were concerned for the welfare of the driver in the accident, so they made entry into the home. Roberts said the front door was slightly open, but was barricaded by something inside. They went around to the backdoor and were able to gain entry after the door was slightly open. When they got inside, they found several containers and cages with poisonous vipers. But their main discovery was a closet filled with 16 marijuana plants that were being grown.

The police exited the home and called Roberts, who began the process of getting a warrant to search the residence. While the police were leaving the home, Eckert and his friend pulled into the drive. He was taken into custody and charged with felony count of cultivation of a controlled substance and a misdemeanor count of possession of paraphernalia for having a smoking pipe.

Eckert is also facing charges from the Lawton Animal Welfare (LAW) Division. Rose Wilson, director of the division, said LAW has filed charges against Eckert, which are pending based on the Lawton Police Department investigation. The charges include possession of illegal vipers and animal cruelty.

“There were a variety of different vipers that were found in the home,” Wilson said. “There were eight different snakes, each extremely poisonous.”

Possessing poisonous animals within city limits is against the law. Wilson said LAW is working to find a permanent home for the snakes. She doesn’t know why he had the snakes, but detectives said he was more concerned for his “babies,” the snakes, rather than the pot plants growing in his closet. But Wilson said the snakes weren’t his only animal-related crime.

“We found a box turtle in the refrigerator,” she said. “It had been there for some time, and we don’t know why he had it.”

Eckert was arraigned in district court on March 4 and was taken back into custody on a $50,000 bond.

2 thoughts on “CU student in custody due to possession of drugs, poisonous snakes”