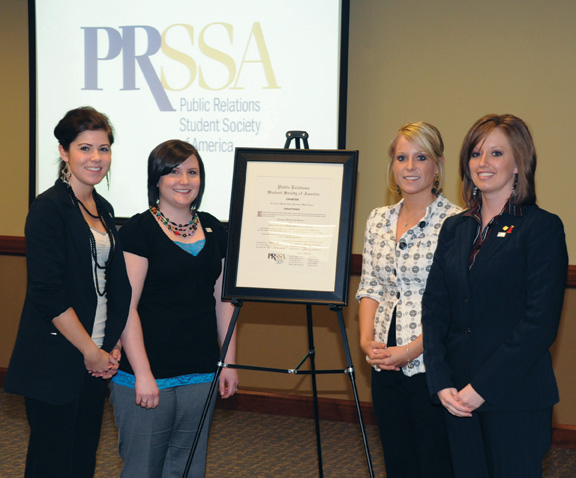 Previously known as the Public Relations Student Society, members of PRSSA are now eligible to apply for scholarships available only to national chapters, participate in the elections of the national officers and will be attending the PRSSA National Assembly in Austin over spring break.

Assistant Professor of Communications Dr. Paul Crandon is the faculty adviser for PRSSA and says he is encouraged by the opportunities the national affiliation carries.

“It’s a major step forward for the Public Relations concentration,” Dr. Crandon said. “When I first arrived at Cameron in the fall of 2007, there was no student group for PR. Students feel plugged into the profession now.”

Because of the association, the student chapter now has access to other professional chapters, and members of the PRSSA are able to utilize all the national affiliation has to offer, Dr. Crandon said.

“What it does is give the students the opportunity to gain information as a professional,” Dr. Crandon said. “Mingling with other professionals, picking up on the lingo; it’s there for anyone and everyone to take advantage of.”

The CU chapter of PRSSA works closely with their parent PRSA organization in Oklahoma City by attending luncheons and conferences twice a semester that relationship was integral to the application process.

“Throughout the process of working with our parent chapter, I told them there is always going to be the University of Oklahoma and Oklahoma State University,” Dr. Crandon said. “But I told them that after they throw OU and OSU on the table, I want Cameron to be the next name mentioned.

As I am telling them this, they’re nodding. In the eyes of these professionals, they agree. It was a really special moment there.”

For senior Communications major and President of PRSSA Jennifer Knapp, establishing a campus organization allowed students with a concentration in PR to interact and get to know each other.

“We found that all other majors had a specific organization that members could be a part of, such as Chemistry majors had the Chemistry Club,” Knapp said, “where students could get together and network. At first it was just going to be a Cameron organization, but then, as we started to set it up, we found that there was a national affiliation and we wanted to obtain that at Cameron.”

“Before, we were like a private entity,” she said. “Now we have more resources and more cooperation available to us from the national association.”

Before establishing themselves as a chapter, the PRSS organization created a student run PR firm, called Aggie Impressions, and last year worked with the Lawton-Fort Sill Cavalry basketball team, as well as the Museum of the Great Plains.

“Sure, you can define Public Relations out of a book, but unless you get your hands in and actually get a feel for it, you won’t know what it’s really like,” Knapp said. “You get a whole new level of understanding when you’re able to work on it. It’s still in progress and we’re still fine-tuning ii, but it’s able to give students a hands-on tool to be able to fine-tune their skills.”