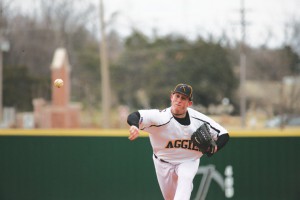 Cameron’s baseball team played their first home series of the season over the weekend of Feb. 19 and 20. After battling through a duo of doubleheaders, the men split the series against the Greyhounds of Eastern New Mexico 2-2.

The Aggies fought hard, but lost the series opener 7-3. Despite the loss, senior Keith Powell pitched a respectable game and has an ERA of 2.89 for the season. After dropping the first game of the day, the Aggies bounced back and took the second game 5-2. Cameron had an impressive win over the Greyhounds in the third game of the series as well, winning 8-1. However, Eastern New Mexico came back in the final game and defeated the Aggies 5-2.

Sophomore Logan Grimes dominated the third game from the mound. Not only did Grimes only give up one run, but he also leads the team in strikeouts thrown this season, with a total of 10. As a result of his performance, Grimes managed to cut his ERA for the season nearly in half.

Coach Todd Holland said he was pleased with the way his pitchers performed against Eastern New Mexico, but acknowledged that the Greyhounds’ tough offense put pressure on the pitchers.

“All we can do is just ask for a chance, and our pitchers did a really good job, but the guys on the other team were hitting better with two strikes on them than no strikes on them, so we had to just try to get them out early in the count,” Holland said.

Though the Aggies had a respectable performance at the plate as well, the men’s batting efficiency did not match the hitting power they showed at Angelo State. However, clutch hitter Alex Lyons drove in three runs and scored three runs of his own in the series.

Holland also drew comparisons to the Angelo State series and said his team struggled to get the right hits at the right times in this match up.

“We had 22 hits in the first game, but they were so spread out you couldn’t tell,” Holland said. “We never got a hit when we needed one, unlike when we played Angelo, where we seemed to get the hit we needed every time we were at the plate. We just left a lot of runners on base this series.”

In the field, the Aggies let too many errors creep in and did not play as cleanly as Holland would have liked.

“It just seemed like once one thing went wrong, another error would follow. We didn’t recover well,” Holland said. “We just didn’t manage well enough.”

Holland acknowledged that there were areas in which the team needs to improve, and he said they will be working on those things in practice, even though the weather has once again forced their practices to move indoors.

“We’re going to do a lot of hitting, so maybe it’s a good thing we’re going back inside,” Holland said.

With the move inside, the men will have ample opportunity to work on their hitting at the batting cages. Before Cameron had their impressive win over Angelo State in the previous series, the team had not been able to practice outside for more than two weeks, so it is possible that retreating back indoors might yield more wins for the Aggies.

Though the men’s coach is slightly disappointed to see the possibility of an undefeated season disappear, Holland’s outlook for the year remains positive.

“We won’t go undefeated, but there’s no need to hit the panic button,” Holland said. “We’re a game ahead of where we were last year, and we haven’t lost a series in a year and a half.”

The team can be seen in action at Cameron’s McCord Field on March 5 and 6 when the Aggies take on Northeastern State.