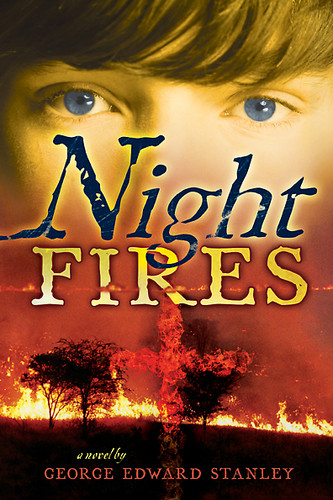 The whirlwind of success for Dr. Edward Stanley’s “Night Fires” continues after it was nominated for the Oklahoma Book Award by the Oklahoma Center for the Book.

“Night Fires,” the latest book from Dr. Stanley, follows a young boy living in 1920s Lawton who loses his father. He finds a father figure in a next door neighbor who happens to be a leader in the Klu Klux Klan. The darker material is a departure for Dr. Stanley, who has traditionally written children’s books.

“In the past, I’ve always written books that are fun to read,” he said. “They call that mass market, but it’s enjoyable for people to read. This one has a deeper meaning to it. Mass market books can have meanings as well, but this one especially has one.”

“I’m from Texas, but the Stanleys have been all over East Oklahoma,” he said. “The very idea of my receiving an Oklahoma Book Award would be such an honor because of the family history and all that.”

“Night Fires” has been one of Dr. Stanley’s most successful original titles. It was such a departure from his normal writing style that his editor questioned whether he truly wanted to write it when he first proposed the idea. Dr. Stanley said the idea for “Night Fires” came from several years of research he did for an almanac and discovered the KKK’s presence in Lawton.

“This was a long time coming together,” he said. “Mainly because my editor was a vice president, but she just didn’t have the time to edit it. But there was this back and forth with her, because she was disturbed by the child having a fascination with the KKK.”

Dr. Stanley said the writing process was back and forth over the course of the four to five years it took to complete the book. He said his editor wanted more comments from the child about how the KKK was bad, while Dr. Stanley wanted the child to sympathize with them more. He said the “tug of war” ultimately made the book a better story.

“Through the whole writing process, she’s the mother and I’m the boy,” he said. “She keeps telling me how horrible it is, and I keep saying it’s not that horrible, and I can handle it. That’s what the book was all about.”

Dr. Stanley doesn’t know whether he’s going to continue down the darker path. He said he’s not sure how many books he has left, but he’s sure he doesn’t want to write another book that takes five years to complete.

He’s begun work on a new series about a kid named “Smart Alec,” about an intelligent student in the third grade, which will return him to his roots, humorous children’s books. He has one on the backburner called “Aunt Bee, the Dirty Commies and Me,” which takes place during the Red Scare.

“Those times get to be a bit dark because that destroyed lives and such,” he said. “It’s supposed to be humorous though.”

For the moment, Dr. Stanley has his sights set on hopefully winning the children’s book entry of the Oklahoma Society of the Book. He said he’s competing against three friends of his in the same category. But, he’ll know for certain on April 17, when the winners are announced in Oklahoma City.

“I’ve never been nominated for anything like this,” he said. “Usually, it’s the publishers that submit the book, but you can submit one yourself. The types of books I write I don’t look for awards. So this is definitely an exciting time. I just hope I win.”