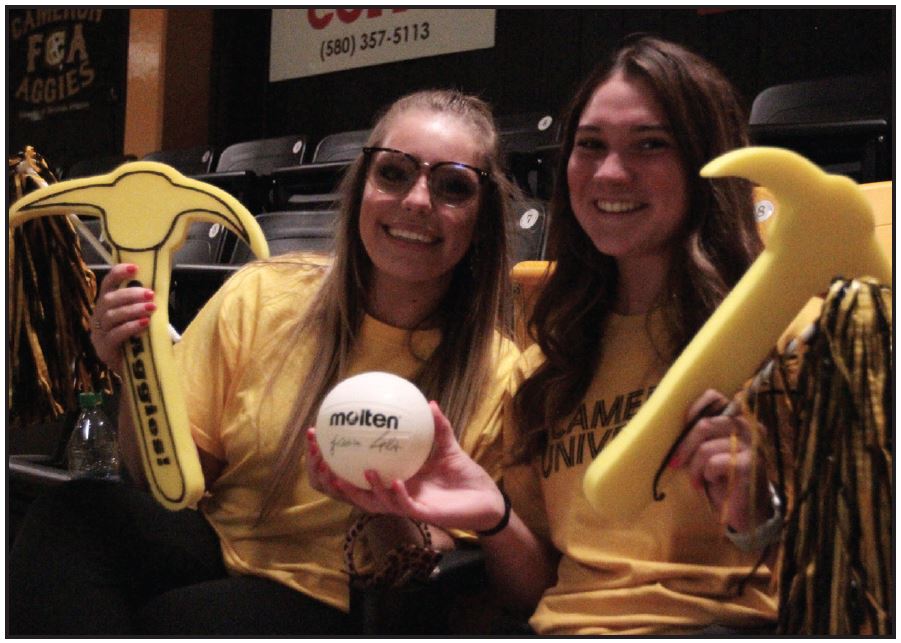 At 6:00 p.m. on Aug. 18, Cameron University concluded the first week of the fall 2022 semester by hosting a pep rally and volleyball scrimmage in the Aggie Gym. Throughout the week, students were invited to come out and show off their school spirit by watching and participating in activities and cheers performed by Cameron’s spirit team.

Campus life staff was stationed at the door giving out $5 concession vouchers, foam fingers, and pom poms to students who attended.

Coordinator of campus life, Daniel McFadden, enjoyed the opportunity to work and watch the event.

“They started out with introducing Ole Kim,” McFadden said. “Then cheerleaders came out and did a couple cheers, taught the crowd what kind of cheers they do so they can join in and really cheer on the squad. Then, we ended with some Minute to Win It games so that way the crowd had some participation and could have some fun, too.”

Ole Kim is Cameron’s mascot and is in charge of heightening the energy of the fans and getting students more involved. After the introduction of Ole Kim, the Aggie spirit team came out and taught the fans the Cameron fight song.

Saige Schmidt, a sophomore, got to hang out with Ole Kim and participate in the event.

“My favorite part is the interaction with the team and with the cheerleaders and with Ole Kim.” Schmidt said, “I beat Ole Kim in a dance battle; that was pretty cool.”

Schmidt made an observation about his disappointment with the number of students in the stands.

“We just need more students to show up,” Schmidt said. “We need to get into the Aggie spirit.”

Due to Covid-19 restrictions, CU hasn’t been able to fully enjoy social events like the pep rally for the past two years. Now that the university is finally starting to open up completely, the campus staff has been encouraging students to get more involved again.

To conclude the pep rally, the lights turned down and the music turned up. Students got a first glimpse at the volleyball team as the announcer showcased each player coming out on the court. One by one, each player came out and threw a signed mini volleyball into the stands for fans to catch and keep.

Emberlynn Carter, a sophomore, came to the pep rally and scrimmage with her friends to support the team.

“My friend that’s on the volleyball team asked me to come,” Carter said, “so me and my other friend decided we should come cheer her on.”

Carter also shared details about her favorite part of the event.

“My favorite part of the pep rally was probably catching the ball signed by my friend, Jessica Lipkit.”  Carter said. “She’s number four.”

After the introduction of players, fans watched a volleyball scrimmage where the CU team played against themselves. Halfway through, campus life hosted a serving contest where students would try and hit the ball onto an empty pizza box. If they hit it, they won a free pizza.

Students who attended had a blast at the pep rally and volleyball scrimmage. It was a great way to introduce the teams as well as give students a chance to unwind and have fun after the first week of classes.

At the conclusion of the scrimmage, posters were handed out that included a picture of the team as well as dates and locations for their upcoming season. The volleyball team lined up outside the gym to sign posters for students.