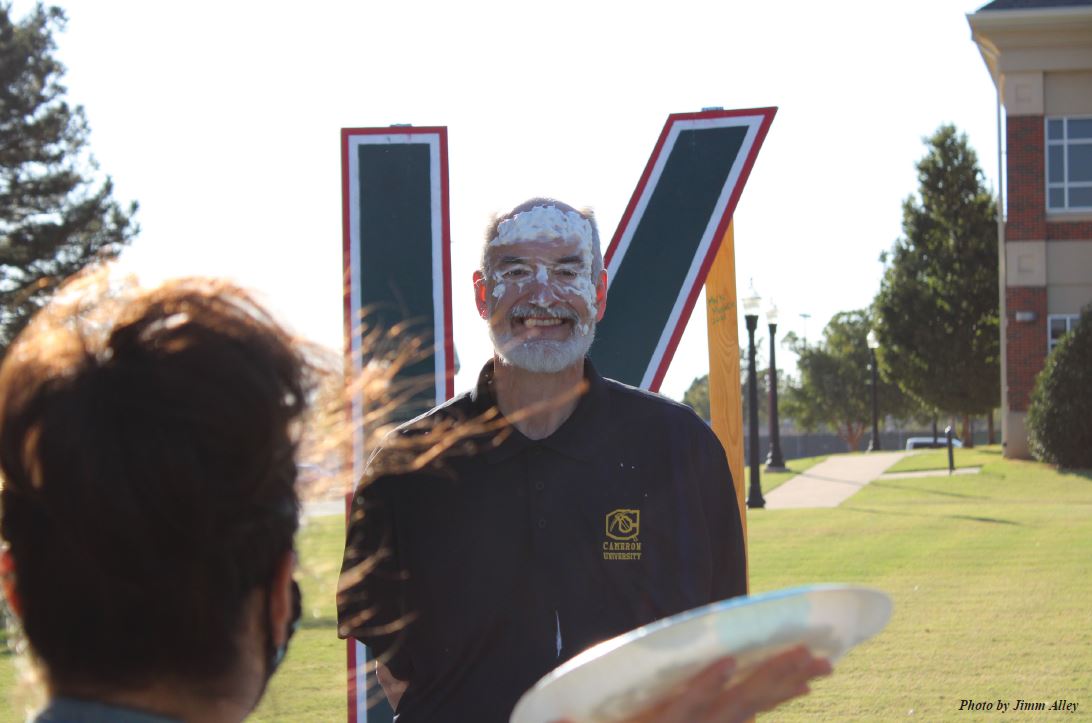 At 5 p.m. on Oct. 20, Kappa Sigma hosted a charity pie-throwing fundraiser on campus for their philanthropy week event.

Students and faculty alike were given the opportunity to donate and participate in the pie-throwing madness.

The fraternity set the fundraiser up at the Bentley Gardens where they made “pies” consisting of whipped cream sprayed onto paper plates.

Individuals from far and wide were then asked to join the event in an effort to raise funds for the cause.

Participants donated varying amounts per throw ranging from $2 a throw to $3 for two throws. Afterward, they each had the chance to throw a whipped pie at one of the three volunteering candidates.

Laughter and excited screams could be heard throughout the gardens as participants donated and “pied” the volunteer of their choosing.

All the donations from the event went to the fraternities nationally recognized campaign Military Heroes. The event’s proceeds aimed to provide help and care for our veterans as well as support for their families.

The fraternity set the plans for the fundraiser in motion after getting approval for the event and gathering volunteers.

The idea for the event was proposed by Nocelotl himself after meeting with an Oklahoma University chapter over the summer. He described how he was influenced by a similar fundraiser hosted by the chapter earlier in the year.

“They talked about how they did a pie-throwing competition as a fundraiser as it was,” Nocelotl said. “I took that idea and ran with it to be our Military Heroes project instead.”

Kappa Sigma has hosted other events in previous semesters. Due to underlying circumstances, however, the pie-throwing event marked the first philanthropy week fundraiser held by the organization in some time.

“We did one my freshman year but it got rained out sadl Nocelotl said. “We haven’t been able to host another one just because of COVID and lack of planning.”

Kappa Sigma was happy with the turnout of the fundraiser, raising 250$ throughout the entirety of the event.

“I think it was a pretty good idea and a good turnout,” Nocelotl said. “I’d like to continue to do it, potentially.”

When asked by Nocelotl to participate in the event, President McArthur was more than happy to join the pie flinging fray. He described how Nocelotl approached him with the idea and how he got involved with the charity event.

“I get to see Mickey every day with the mail delivery and he asked,” McArthur said. “It sounded like a good cause and a good activity.”

McArthur was ecstatic about the event overall and expressed his joy for the organization’s ability to plan such an event.

“We are so happy to have student organizations on our campus who are still finding a way to have events during a terrible pandemic.”